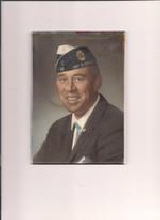 George Lyle 'Wik' Wikstrom, 78, of Astoria died Wednesday, August 1, 2012 at Columbia Memorial Hospital in Astoria.
He was born March 21, 1934 in Clallam Bay, WA to Lyle and Elizabeth (Howard) Wikstrom. In 1952 he graduated from Neah Bay High School.
George was a logger by trade who also served in the US Navy for four years. In 1955 he married Patricia Hillard in Astoria. She survives, residing in Astoria.
Family members said George was a member of the American Legion, Elks and Veterans of Foreign Wars. He enjoyed spending time with his family, fishing and logging.
Mr. Wikstrom is also survived by two daughters and sons-in-law, Pam and Vince Tarabochia of Astoria and Julie and Mark Peterson of Chinnok, WA; a son and daughter-in-law, Richard and Mary Wikstrom of Ft Lewis, WA, Marianne Wikstrom of Hillsboro and Marcus and Jacob Peterson of Chinook; and seven great-grandchildren, Tyler and Madison Wills, Brooklynn Ehrlund and Laylynn Hunter, all of Astoria, Logan and Dallas Norris of Kirkland and Teyani Wikstrom of Ft Lewis. He was preceded in death by a grandson, Richie Wikstrom, in 1991.
Visitation was August 6th and 7th followed by a funeral August 8 at Hughes-Ransom Mortuary in Astoria. Private interment will be at Ocean View Cemetery in Warrenton.
Memorial contributions may be made to Clatsop Post 12 American Legion, 1132 Exchange St. Astoria OR 97103
To order memorial trees or send flowers to the family in memory of George Lyle Wikstrom, please visit our flower store.