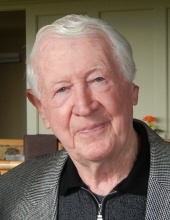 World War II Veteran Gerald "Jerry" Conrad Phillips, 95, died February 27, 2019. At his request no service will be held. Jerry was born on June 20, 1923 in Vancouver, Washington, the only child of Albert William Phillips and Lucille Bayless Phillips. In 1941 he graduated from Astoria High School and soon after joined the United States Army Air Corp becoming a B- 26 Marauder aircraft navigator/bombardier with the 456th Bomb Squadron in the European Theater. He flew 43 bombing missions including providing support to General George Pattons entry into Germany towards the end of the war. He received an Honorable Discharge in 1945. Jerry married his high school sweetheart Betty Lynn Gosnell sharing 64 years together until her death. His three children survive him: Darby Young Gott (spouse Stanley), Jeryl Lynn McGee and Kevin William Phillips (spouse Molly.) Five grandchildren: Ryan and Philip Gott, Jodie McGee Fleming, Brett McGee, Emily Phillips Campeau and six great grandchildren who called him "Papa" also survive him. He had many careers in his lifetime from firefighting and law enforcement to milk delivery but he particularly enjoyed his last field of endeavor selling bowling supplies and equipment. Sports were his favorite pastime with golfing his passion. At age 81 he made his first and only hole-in-one at the Astoria Golf and Country Club where he was a member for many years. He played his last round of golf on his 90th birthday and played a few holes on his 95th birthday. All who knew Jerry considered him a gentleman, a loyal friend, a man of his word and a loving son, husband, father, and grandparent. In many ways he made this world a better place.