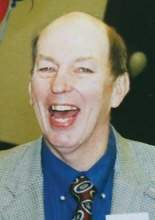 Gerald (Jerry) Ray Westerholm, 75, of Gearhart, passed away suddenly on Jan. 21. He is survived by his devoted wife of 53 years, Charlotte (Workman); daughter Kirsten and son-in-law, Keith Richards, of Bellevue, Washington; son Bill and daughter-in-law, Jeannine Westerholm, of Gearhart Oregon; and five grandchildren: Whitney, Payton and Jordan Westerholm, and Claire and Eva Richards. He is also survived by his brothers Jon (Ina) and Jay (Connie) Westerholm, of Brownsmead. Oregon; brother-in-law Richard (Sally) Workman and sister-in-law Margie Keyser; and many nieces and nephews. Jerry was born in Astoria on Nov. 25, 1940, to William and Mable (Barendse) Westerholm. He grew up in Brownsmead, where he developed his love for the outdoors, especially fishing on the Columbia River, and farming and hunting, all of which he enjoyed with his brothers and cousins. He graduated from Knappa High School in 1959, where he was student body president and excelled at football, basketball, baseball and track. He earned a bachelor of science degree from Pacific University in 1964, where he was a three-sport athlete. He began his career as a history teacher and coach at Seaside High School in 1964, and was hired as athletic director in 1969. He developed the Seagulls' athletic program, and took pride in watching his student athletes learn the value of competition while also learning life skills. He was honored with state and regional athletic director awards, and was a finalist for national athletic director of the year in 1995. He was a consistent presence in the stands and sidelines for the past 50 years, rooting on local athletes, including his children and later his grandkids. He pursued numerous outdoor passions during his adult life with his tight-knit group of friends and family. He was a gillnetter on the Columbia River and Cook Inlet, Alaska, and dory fished in the Pacific Ocean. He spent weekends on the hunt for coastal elk and blacktail deer, plus countless hours in duck blinds with his son. He was a Gearhart volunteer fireman for 25 years. Jerry was an expert in Clatsop County history, and was always ready to share a story over coffee. There will be a memorial service on Saturday, Feb. 6, at 2 p.m. at the Seaside High School gymnasium. In lieu of flowers, please donate to the Jerry Westerholm Memorial Scholarship Fund for high school student athletes, in care of the Seaside High School Hall of Fame, P.O. Box 2101, Gearhart OR 97138.
To order memorial trees or send flowers to the family in memory of Gerald "Jerry" Ray Westerholm, please visit our flower store.