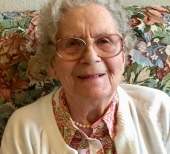 Geraldine June Beals was born on June 26, 1923 near Clarks, Nebraska and died at the age of 95 on September 29 in Willamette View Health Center in Milwaukie, Oregon. As a girl, she lived on a farm and went to a country school. In 1937 at the age of 14, Gerrie moved to Corvallis with her family and parents, Martin and Minnie Madison. This was during the dust bowl and her older brother and relatives had already moved there. Gerrie had 3 sisters and 5 brothers. She went to college at Oregon State University and took bookkeeping courses. This led to a job at US Bank, and she married the bank managers son, Myron, a World War II pilot who was shot down over Germany and was a prisoner of war. Myron and Gerrie moved to St. Helens, Hillsboro, and then Astoria, where Myron was a pharmacist. He died in 1998. Gerrie is survived by her five kids, Hannah-Christie Grandey (Truman), Betty (James Hynson), James (John Stevenson), Linda Henderson (Mark) and Ed (Michael Mazzaferro). There are five grandchildren: Morgan and Lily Hynson, Kyiie Henderson and Angela and Carlo Mazzaferro. Professionally, Gerrie worked in the school lunch program, the kitchen at Camp Rilea and at the Johnson Drug Store with Myron. She loved garage sales and restored many items she found for her home and for her kids as they left the nest. After Myron died she volunteered at the Red Cross, Flavel House and Loaves and Fishes. She was a long time active member of the Astoria Christian Church. She moved to Willamette View in 2006 to be near her family. She had mild cognitive impairment which, over 12 years, progressed to a unique dementia. She became more humorous and loving than ever, and said what she thought. Gerrie revealed her talent for art and her collages were exhibited in the Ageless Art program. The comments from staff were heartwarming and they, like family, will miss her now that she is gone. "Blessed are the pure in heart, for they shall see God" is inscribed on Myron and Gerries headstone at Ocean View Cemetery, where there is a private interment this week. Funeral arrangements in the care of Hughes-Ransom Mortuary & Crematory, Astoria, OR - www.hughes-ransom.com