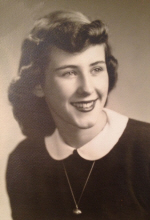 Geraldine Renee Koerner passed away peacefully on Wednesday, April 9th in Bend Oregon with her children at her side. Her kind and gentle spirit will always be remembered. She was born in Fairbanks, Alaska on December 12, 1935 to Maximillian and Agnes Miller. She moved to Watsonville, California with her mom and step father Bert Moen where she grew up and attended high school. She received her BA in Business from San Jose State College in 1957. While at San Jose State she became a member of the Alpha Chi Omega Sorority and Eta Mu Pi, a national business honorary group. She met and married Roby "Ward" Renshaw while at college. The young family moved to Corvallis, Oregon so Ward could pursue his education at Oregon State University. During the college years the family grew to four children and Geri devoted her time to being a wife and mother. In the years following a marriage split with Ward, Geri met Charles Koerner and they married in July 1972. Shortly after that they moved to Astoria and then to Seaside, Oregon where Geri resided for the next 40 years. Geri made friends easily, enjoyed people's company and was affiliated with the church. She always had a kind word to say and took genuine interest in what others were doing. Geri is survived by her two sons, Michael Roby (Linda) Renshaw of Benicia, Ca. and Scott Ward Renshaw of Tempe, Az., her daughter Renee Renshaw-Myrwang(Jack Myrwang) of Bend, Or., three grandchildren and 1 great grandchild. She is preceded in death by her husband Charles Koerner, her son Barry Renshaw, and her parents. At her request, no services will be held. She is laid to rest next to her husband in the Evergreen Cemetery in Seaside.

Funeral Home:
Hughes-Ransom Mortuary Seaside
220 N Holladay
Seaside, OR
US 97138
To order memorial trees or send flowers to the family in memory of Geraldine Koerner, please visit our flower store.