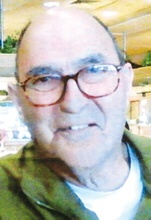 Harold Francis "Hal" Baker, 85, of Astoria, died Tuesday, Sept. 4, 2012, at home.
He was born Oct. 26, 1926, in Martinez, Calif., to Frank Baker and Mabel Wheaton and attended Alhambra High School in Martinez.
He married Jean Churchman Baker in Reno, Nev. She survives, residing in Astoria.
For over two years, he served in the U.S. Navy. He received a Good Conduct Medal, and was honorably discharged.
Mr. Baker worked in maintenance for Caltrans in California for 37 years. He retired in 1988.
He was a member of Grace Community Baptist Church, the Veterans of Foreign Wars and the American Legion.
Family members said his interests included reading, and he got great enjoyment from being a Daily Astorian newspaper carrier.
In addition to his wife, he is survived by three daughters, Francine Baker Griffin of Cottonwood, Ariz., Carole Baker of Astoria and Terry Baker Edmonds and her husband, Steven, of Las Vegas; a son, Harold Baker of Cottonwood; a stepdaughter, Linda Blackburn Brandon of Astoria; 17 grandchildren; and 19 great-grandchildren.
A service has already been held.
Memorial contributions may be given to the Clatsop Community Action Regional Food Bank, in care of Clatsop Community Action, 364 Ninth St., Astoria, OR 97103. The memo line in the check should specify the donation is for the food bank.
To order memorial trees or send flowers to the family in memory of Harold Francis Baker, please visit our flower store.