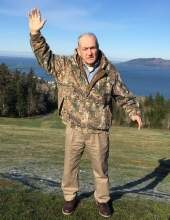 Harold had many jobs in his lifetime, working for the railroad, Boeing on the Minute Man Missile Project, he spent some time in real estate and made an investment in Seattle in the mid 1960’s where he owned two apartment buildings in the Central District along with a home in Burien. Harold was also a long haul trucker where he always had an eye out for homes and apartments to fix up.

Fast forward to 1973 while trucking in Idaho, Harold met the love of his life, Shirley Woodland. Falling deeply in love and soon marrying, combining their families together. They loaded up in the truck and headed to the Northwest to start one of best adventures of their lives. Landing in Seaside, Oregon. Finding property a few blocks from the Seaside promenade, they made the investment and purchased an apartment complex and made a home for themselves and their children.

Harold was proceeded in death by his parents, wife Shirley, daughter Linda, son Lynn, and his brother John.

He is survived by his children, and his brothers Gene, George and Roger. Along with 12 grandchildren and 19 great grandchildren.

Harold was a humble, loving, caring man. He enjoyed being a Seaside City Council Member elected in 1986, President of the Lyons Club with duties that included transporting donor eyes to Providence Portland. He was also a member of SOLVE helping with beach cleanup.

The best job he had was being a husband, a father, and a grandfather. He would wake up singing zip-a-dee-doo-dah to start his day with his black coffee sitting at the kitchen table watching the birds past through. His days where spent sharing all his knowledge of his lifetime and also all the new things he learned that day to whomever would listen. He always had a smile on his face as one of his children or grandchildren were always right behind to help hammer a nail or help empty the coins out of the laundry slot.

Harold took pride in everything he did in life. He was loved by all and will be deeply missed. Knowing that he is at peace and back with his lovely wife, we will all take comfort in knowing that they sit above in their cozy recliners watching over all of us.

Celebration of life will be held at Hughes Ransom Funeral Home 220 Holladay Drive, Seaside, Oregon 97138, on October 3, 2020, at 11:00 am.
To order memorial trees or send flowers to the family in memory of Harold Keith, please visit our flower store.