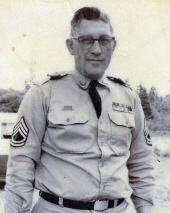 On February 5, 2014, Harry S. Clark passed away. He was born February 8, 1923, passing just before his 91st birthday. Harry was born in Clarkes, Oregon, to George and Mamie (Sager) Clark. He grew up on the family farm with his three sisters and one brother (who precede him in death). Harry went to elementary school in Timber Grove, and graduated from Oregon City High School in 1942. He then served in the Army during WWII where he was with the 448th Anti Artillery Battalion of the 25th Infantry Division under General Patton. Battles he fought in, but not limited to were, landing on Omaha Beach and Battle of the Bulge where he was awarded the Bronze Star. After the war ended, he worked in a tire store then did tree surgery for a time. He later joined the National Guard where he served for 23 years starting at Clackamas, then in 1961 started the 1st maintenance shop at Camp Rilea. Throughout this time he was married to Delores Bradley. They wed in 1945 and had five children; sons, Dennis, Gary, Michael and Timothy Clark; and a daughter, Cheryl Reynolds. After returning from the National Guard he worked for Wing as a truck driver until the company was sold. He then worked for Howard B. Johnson as a truck driver and truck mechanic until they, too, sold out. Harry then began working with Teevin Bros. Beginning as a driver and later did the maintenance on Teevin's log trucks until going into semi-retirement. In 1964, after ending his first marriage, he married Carrolle Koller along with her four children; sons Carl Evans, Michael Busby, and Willard Koller and a daughter, Mary Beth Reed. They were married for 47 years. She preceded Harry in death in 2011. Harry is survived by all his children as well as 27 grandchildren and 23 great-grandchildren. Harry passed away at his home with loved ones by his side. There will be a visitation on Wednesday February 12, 2014, at 10:00 a.m. with a funeral service to follow at 11:00 a.m. at Hughes-Ransom Mortuary in Astoria. A graveside service with military honors will follow the funeral at Greenwood Cemetery in Astoria. A reception will follow the graveside at the Warrenton Christian Church.