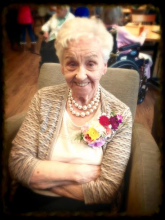 Hilda "Jackie" Elsie Thackery, of Astoria, went to be with the Lord on November 18, 2015, surrounded by family. Jackie was born Sept. 25, 1925, in Sherwood, Oregon, to Albert and Hertha (Conzelmann) Meinecke. She had three sisters and two brothers; William, Marion, Ruby, Ruth, and Henry. William and Ruby preceded her in death. After completing Lutheran Day School, she went on to graduate from Sherwood High School. On June 1, 1948, Jackie married Loren Thackery. They have two children. She loved being a homemaker and mother. She is well remembered in her extended family for hosting huge holiday dinners. Jackie and Loren purchased Loren's Sanitation Service in 1958. In 1995, she and her son started Wheat LLC. Jackie received numerous professional awards, including Oregon Sanitary Service Institute's "Woman of the Year" in 1988. She was also a long time member of Women Entrepreneurs of Oregon. Jackie devoted much of her life to volunteer work in her community. In 1992, after her retirement and divorce, Jackie moved to Astoria to be close to her grandchildren. She enjoyed volunteer work as a docent at the Flavel house for several years. Jackie loved spending time with her family, hosting Bible studies, travelling the world, knitting, gardening, crafts, arranging flowers, volunteer work, and watching the Columbia River shipping traffic. She had an infectious smile, and gave great joy and encouragement to everyone around her. She was a member of Bethany Free Lutheran Church. Jackie is survived by her son Wayne (Pam) Thackery of Keizer; her daughter Trinna (Al) Tollefson of Astoria; her grandchildren, Amy Tollefson, Alivia (Mike) Rochon, Noah (Jennifer) Tollefson of Astoria, and Rose Tollefson of Portland; as well as her great grandchildren. Visitation will be on Friday, November 27, 2015, from 11am to 5pm, at Hughes-Ransom Mortuary in Astoria. A Celebration of Life will be held at 11:00am on November 28, 2015, at Bethany Free Lutheran Church, followed by a reception. Graveside services will be at 2:00pm at Greenwood Cemetery. Memorial contributions can be made to Bethany Free Lutheran Church, 451 34th Street Astoria OR 97103.
To order memorial trees or send flowers to the family in memory of Hilda "Jackie" Elsie Thackery, please visit our flower store.