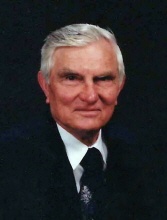 Leslie McFarland, of Seaside, Oregon passed away at home on November 29, 2017 of lung cancer at the age of 93. He was born in Palmyra, Missouri, to Roy and Mattie McFarland on March 25, 1924. The youngest of seven, he lived in Palmyra on the family farm until entering the army during WWII where he was deployed to Europe as a truck driver. Upon his discharge in 1946, he joined two of his brothers in Portland working construction and in 1947, came to Seaside where he drove a log truck for the next forty years. He met his wife Loretta in Seaside where she worked in her mothers restaurant/ice cream parlor that is now the Bridge Tender on Broadway. They married in 1950 and bought their home near Gearhart where they raised their family and remained the rest of there lives. Les spent many years as a volunteer fireman with the Gearhart Fire Department. While pitching for the mens fast-pitch softball team, Les also collected many bowling trophies, and was a member of the Moose lodge for almost 70 years, going through the chairs, receiving the Pilgrim Degree of Merit in 1980, and serving as the secretary of the Seaside Moose Lodge for 20 years. He was also an active member of the American Legion. He will be remembered for his unwavering help to anyone who needed a hand. Les is survived by his daughter Susan Weston; his step-son David Gassner(Marilyn); his step-daughter Margaret Christenson(James); numerous grandchildren and great grandchildren, as well as many nieces, nephews, and great-nieces and grand-nephews. He is preceded in death by his wife Loretta in 2013, his six brothers and sisters, and his step-son William. A memorial service/pilgrim ceremony will be held at the Astoria Moose Lodge, 420 17th Street, Astoria, Oregon followed by a celebration of his life at 1pm on January 6th 2018 to which all of his friends are invited to attend.