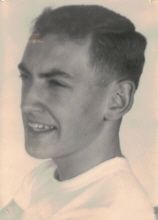 Jack Dwight Dennon March 18, 1934 May 8, 2018 Jack Dennon was born on a ranch in Adrian, Oregon, not on March 19th, as his birth certificate states, but a day prior. He disagreed with bureaucracy from then on. The Dennons moved to Elsie, Witch Hazel, and Cannon Beach, where they operated a gas station and general store. Jack and his older brother delivered The Oregonian and published their own paper - Cannon Beachs first. At Seaside Union High School, Jack wrote the sports column of the school newspaper. He studied Journalism at the University of Oregon but, deciding he wanted to build boats, transferred to Engineering at Oregon State University. Though Jack flunked statics (spending that semester reading Hemingway), he went on to earn a Master of Science in Mechanical Engineering and teach that very course. A student officer, he joined the military upon graduation and walked strait from commencement, held at one field, to an induction ceremony, held at another. Jack spent two years at Aviation School in Ft. Rucker, Alabama. He purchased a plane in New Jersey and flew it home to Astoria. Jack worked at Boeing Airplane Co. for eleven years as a computer programmer, denying a promotion so he could continue independent work. Back in Clatsop County, he founded MicroMethods and contracted out to the Dant & Russell Warrenton Lumber Co., designing and troubleshooting sawmill machinery. He remained with the mill as it was acquired by Cavenham, Willamette, Weyerhaeuser, and finally Hampton Industries. The Cameron Carriage, his and Bob Camerons flagship piece of equipment, was also installed in Idaho. A colleagues wife introduced him to Jean Raitanen and they married on May 17th, 1980. The following day revealed a snowfall of fine ash Mount Saint Helens aftermath. They had two boys and two girls. Jack enjoyed long after-dinner talks on the back porch and mowing on his John Deere tractor. Summers meant endless blackberry picking and an annual pilgrimage to Sunriver, where Jack spent most of his vacation visiting relatives. Jack attended all the family reunions he could. Jack knew computers at their most unapproachable. He scoffed at the emergence of Microsoft programs designed for entertainment and resistant to customization. A Linux evangelist, Jack wrote a monolith on personalizing that software to the individuals need: Build Your Own Linux C Toolbox (1999). He self-published as Two Moon Press (with the logo "((" nested parentheses), but went through Hayden Book Company for an earlier volume, CP/M Revealed (1982). He worked seven days a week and kept his own counsel to "Keep your shoulder to the wheel, your nose to the grindstone, and your ear to the ground." Jack fired off irascible Letters to the Editor of this paper decrying the federal government, the war on Iraq, and the public school system. When pulled over for not wearing a seat belt, Jack held forth on the American fallacy that equates vice with crime, quoted a few choice political thinkers, and encouraged the cop in question to "get a real job." He received many tickets. Jack lived by the maxim, "A man is wealthy in proportion to the number of things he can afford to do without," but never expected his girls to do the same. Like his famous chili-roni recipe, his own bio is brief and best: Jack Dennon studied mechanical engineering at Oregon State University in Corvallis, mayhem at the Infantry School at Fort Benning, low flying at the Army Aviation School at Fort Rucker. Nowadays he uses DOS to maintain legacy sawmill systems, studies how to replace them with GNU/Linux and helps his wife homeschool their four children. Jack is preceded in death by his parents, Bud and Elaine Dennon, his brothers, Jim Dennon and Jerry Dennon, his oldest son, Andrew Dennon, and his niece, Elizabeth Kaltreider. He is survived by his wife, Jean, and children Alexander, Amanda, and Anne.