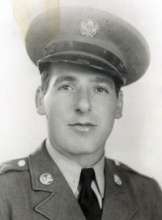 Jack J. Rubino Sr., "Champ," of Astoria passed away October 15, 2013, at the age of 97. He was born November 22, 1915, in Pittsburg, California, to Salvatore and Josephine (DiMaggio) Rubino.
On September 30, 1941, Jack enlisted in the United States Army. While in WWII he was a Prisoner of war from Dec. 1944 to April 1945. During his time in the Army he earned a Good Conduct Medal, American Defense Service Medal, European African Middle Eastern Campaign Medal, and the Purple Heart Medal.
Jack married Esther B. McClure on June 20, 1945. They had five children together.
He was of the Catholic faith and a member of the American Legion. Jack enjoyed fishing, especially commercial fishing, and he was good at it, too! He also had a love for cooking!
Jack was preceded in death by his wife Esther and his daughter Darlene. He is survived by three sons; Ron and Joanne Rubino of Astoria, Jack Rubino Jr. of Astoria, and Vince and Ann Rubino of Gearhart; one daughter, Connie and Steve Maize, of Phoenix, AZ.; and numerous grandchildren and great-grandchildren.
A visitation will be today from 2-7 p.m. at Hughes-Ransom Mortuary in Astoria. A graveside service with Military Honors will be held Saturday October 19, 2013, at 11:00 a.m. at Ocean View Cemetery in Warrenton.
Hughes-Ransom Mortuary in Astoria is in charge of arrangements.
To order memorial trees or send flowers to the family in memory of Jack J Rubino Sr, please visit our flower store.