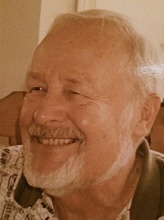 James Preston Benson February 26, 1934 November 26, 2015 James Preston Benson, 81, of Seaside, Oregon died of age related causes on Thursday November 26, 2015 at Providence Hospital in Seaside, Oregon. Known to family and friends simply as Jim, he was born at Baylor University Hospital in Dallas, Texas on February 26, 1934. Jim was the only son of Stuart P. Benson and Eva Iona Benson. He is survived by his wife of 54 years, Ginger Benson. The Benson family moved to the Pacific Northwest in 1935 and eventually settled in the Portland area in 1942. Jim graduated from Portland's Grant High School in 1952 and then spent the next four years serving in the United States Army, seeing duty oversees in Japan during the Korean War. Following his Army service Jim attended Linfield College in McMinnville, Oregon where he earned a degree in business and captained the tennis team. He married Ginger on April 2, 1960 and after stints in Myrtle Creek and Salem the couple eventually found their way back to Portland in 1967. Jim was a kind man with an easy smile and a contagious laugh. He enjoyed an active life style and was always on the go. He completed multiple marathons while in his 40s and 50s. He was an avid golfer and consistently shot in the 80s. He was a long time Trailblazer and Duck fan and enjoyed attending games with his children. He also enjoyed international travel, highlighted by trips to The Holy Land and Great Britain. He read voraciously and considered himself a student of history. He often spoke of his great admiration for former British Prime Minister Winston Churchill. Jim was an accomplished financial manager and spent his working career managing the financial affairs of numerous banks and local businesses. He began his career managing local bank branches for US Bank, worked at Hirsh Weiss/White Stag for many years and finished up working as the finance manager of The Pape group in Eugene, Oregon. In addition to his surviving wife, he is also survived by his four children: Jim and his wife Cheryl of Portland. John and his wife Ruth of Eugene, Jeff of Seaside and Jill also of Seaside. He is also survived by his sister Marcia Marks of Scappoose, Oregon, Jim had five grandchildren and one great grandchild. Jim's memorial service will be held at 2:00 pm on Saturday January 16, 2016 at Grant Park Baptist Church in northeast Portland 2728 NE 34th Ave. In lieu of flowers, the family suggests donations be made to the National Stroke Association.