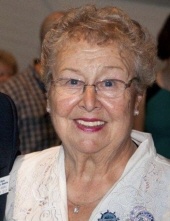 It is with great sadness that the family of Janet E. Teevin announces her passing on April 23, 2019. Janet Evelyn Teevin was born in Vernonia, Oregon on March 23, 1936 to Ervin and Helen (Bergerson) Smith. She grew up in Seaside, Oregon graduating from Seaside High School. She married Robert (Bob) Teevin and had two boys, Jeffrey and Shawn. Her husband was killed in a logging accident at the age of 31. Later she also lost her son Jeff at the age of 26 in the same manner. Janet opened what would be known and loved by many as Jans Gifts in Seaside. Home dcor was a passion of hers and was the vehicle that allowed her to establish lifelong relationships with those in her community. After she retired she hit the open road, another of her passions, and traveled long distances with her motor home - car in tow. She lived on the Mill Pond in Astoria with her dog Peaches for many years where she loved to watch the ships and grow her flower garden. She later moved to Clatsop Retirement Village. Her last residence was at the Clatsop Memory Care facility in Warrenton, Oregon where she passed away at the age of 83. Janet will be lovingly remembered by her son, Shawn (Paula) Teevin; two grandchildren, Katie Teevin and Jeff (Gretchen) Teevin; a great granddaughter, Brinlee Teevin; and her only sibling, Gordon (Kathy) Smith. She will also be forever remembered by her nieces, a nephew and extended family and dear friends. A Celebration of Life will be held May 18, 2019 from 12 noon until 2:30 P.M at the Astoria Country Club. Memorial donations in memory of Janet may be made to Alzheimers Association Oregon Chapter.