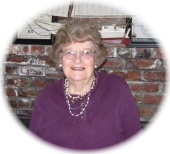 April 1, 1918 Jan. 23, 2015 Jeanne I. Daae was the daughter of Herbert Welcome and Marjorie Ingham. She was born in Minneapolis, Minn., and moved to Portland in 1920 when she was 2. She graduated from Commerce High School in 1937. During the Depression she moved to San Francisco to find employment, and worked for Lederle Lab for two years. She then came back to Oregon and worked for the state. She met her husband at a dance when she was 19, and they were married in 1941. They moved back to San Francisco and had their first child, Konrad Jr., in 1942. In 1943 they moved back to Portland and Margie was born in 1946. Jeanne worked many different jobs during her life. She worked in the shipyards as an electrician. She was a secretary for White Stage, Overhead Doors, Power Brake, Fred Meyer and retired from Dale Webber after 20 years. Jeanne was involved in the American Legion Auxiliary for 61 years. She served as president, vice president and La Petite. She volunteered at the Veterans Hospital and Scholarship Program, and was a Girl Scout leader for many years. Jeanne and her husband traveled to Europe and Asia. They also traveled in their trailer around the United States and Canada. Her last trip was to Europe with her son, when she was 85. Jeanne lived in her beloved home in Seaside for 9 years. Before that she lived in Tolovana Park for 16 years. Jeanne was preceded in her death by her husband Konrad in 2000, and her son Konrad Jr. in 2012. She is survived by her daughter, Margie Hacking of Cannon Beach. Her grandchildren are Paul and Jennifer, Mark and Angela, Lori and Chris, and Kristine and Greg. She has five great-grandchildren. Her greatest joys were having family gatherings and developing friendships with so many people over the years. She was definitely a people person who loved to laugh and have a good time. Jeanne's celebration of her life was at her 90th birthday party when she could laugh, eat and enjoy her family and friends. In lieu of flowers, donations can be made to the Lower Columbia Hospice, 2111 Exchange St. Astoria, OR 97103; the Clatsop County Animal Shelter; or a charity of your choice. A graveside service will be held at Willamette National Cemetery on Friday, Jan. 30 at 9:30 a.m. Hughes-Ransom Mortuary is in charge of arrangements.

Funeral Home:
Hughes-Ransom Mortuary Seaside
220 N Holladay
Seaside, OR
US 97138
To order memorial trees or send flowers to the family in memory of Jeanne I. Daae, please visit our flower store.