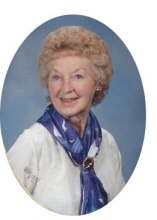 Jessie Gloria Wallace, passed away at her home in Seaside, Oregon on August 10, 2015 at the age of 93 while sitting in her favorite chair. Jessie was born February 17, 1922 in Tacoma, Washington to William and Jenny Porter. She was the sixth of thirteen children. Jessie graduated from Chimacum High School in Washington and went on to attend Syracuse University before transferring to the University of Washington. Jessie met Joseph Patrick Wallace at a USO dance in Seattle, Washington in November of 1942 and a year later were married on November 15, 1943 in Seattle. Jessie took some time off her senior year of college to travel to San Diego, where her husband Pat was training in the Navy before he was shipped out to the South Pacific during WWII. Upon returning to the University of Washington, Jessie completed her Masters of Education Degree in Physical Education. When Pat returned from the Navy, Jessie met him in Los Angeles and the two boarded a train to West Virginia to meet her in-laws. Shortly after arriving back in the Northwest, their first child Kristi was born on July 31, 1946 in Seattle. The family of now three then returned to Missouri where Pat attended the University of Missouri. A couple years later the family moved to Vernonia, Oregon where on September 17, 1952 their son Dennis was born. Six years later the family now of four moved to Seaside, where Jessie and Pat raised their family. Jessie taught girls physical education, oversaw the elementary school library and coached in the Warrenton School District until she retired in 1985. Following the death of Pat in 1992, Jessie did volunteer work at Camp Kiwanilong for 19 years and volunteered at the Seaside Chamber of Commerce for 13 years. She was a long time member of the Seaside United Methodist Church. Jessie loved the church and it was a very important part of her life. One of Jessie's favorite pastimes was butterflying. She shared her experiences of traveling all across the Western states with her husband, her sister Iris and her long-time friend Trinda. Jessie was wealthy in her friends. As her health declined her friends and neighbors offered her much loving support and kindness. She felt very blessed to have such great friends and family. She was very thankful to have such a wonderful life. Jessie is survived by her daughter Kristi Culver, grandsons Patrick and Benjamin Culver, her son Dennis Wallace and his wife Gail, and granddaughter Katie Boedigheimer. In lieu of flowers, contributions can be made to the Seaside United Methodist Church.
To order memorial trees or send flowers to the family in memory of Jessie Gloria Wallace, please visit our flower store.