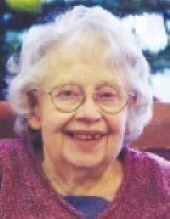 Joan 'Joanne' Johnson , also known as 'Jo', of Astoria, died Sep 15, 2012 at Clatsop Care Center in Astoria. She was born Dec 10, 1932 in Minneapolis, MN to David and Kaisa (Isojarvi) Haapala. In 1953 she married James Raymond Johnson in Minneapolis, MN.
She was a homemaker, accountant and caregiver and had been retired for several years. Family said she enjoyed music, especially singing; knitting and crocheting, holiday baking, and gardening. She loved taking walks, especially on the beach and lighthouses.
Joan is survived by 3 daughters, Karen Drummond and Linda Johnson of Astoria, and Katherine Johnson of Turku Finland; a son, Daniel Johnson of Beaverton; three grandchildren, Jolene Johnson-Mitchell of Portland, Annie Beach of Sumter SC and Eli Johnson of Salem; four great grandchildren, as well as 10 brothers and sisters-in-law; many neices, nephews and grand nieces and nephews.
She was preceded in death by her parents, her husband, James, and brothers, Roy, Emil, and John and sisters, Hazel, Mabel, Irene, Verna and Janet.
Visitation will be at Hughes-Ransom Mortuary 576 12th Ave Astoria on Sep 21, 2012 from 5 - 7 pm. Funeral service will be at the Apostolic Lutheran Church, 1012 Irving Av, Astoria on Sep 22, 2012, with interment at Ocean View Cemetery in Warrenton.
Memorial contributions may be made to the Apostolic Lutheran Church c/0 Cary Johnson 37751 Hwy 30 Astoria OR 97103
To order memorial trees or send flowers to the family in memory of Joan Marcella Johnson, please visit our flower store.