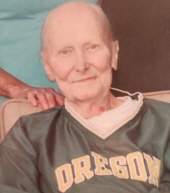 John Marshall Erhardt, 81, passed away in his home in Astoria, Oregon on June 17th, 2018. John came into this world in August of 1936, the only child of George and Maude (Brew) Erhardt. Born in Los Angeles, John grew up in California and attended college at what is now California State University; he later earned his Masters degree at the University of Oregon. A military veteran, John served his country for 41 years in the United States Armed Forces National Guard. He first served in the California Air National Guard as a Captain, then in the Oregon Army National Guard from 1977 to 1996. 14 of his 18 years of service in the Oregon Army National Guard was as a training NCO/First Sergeant and was split between the 1249th Engineer Battalion and the 442nd Engineer Detachment. He spent 19 years working in law enforcement in both California and Oregon, starting with the Los Angeles County Sheriffs Department. John moved to Coos Bay, Oregon in 1971, where he worked for the Coos County Sheriffs Department. He then moved on to the North Bend Police Department, which is where he would meet his wife Jackie (Conway-Martin) in 1978. They married in July of 1982 and spent over 35 years together, raising a blended family. John was a strong, caring man who loved horseback riding, golfing, and bowling - but most of all, his family. He was preceded in death by his parents and an infant son. He is survived by his wife, Jackie Erhardt; his children, Eric (Sherry) Erhardt of Croton, Ohio; Johnny Erhardt of Mendota, Illinois; Mike (Linda) Martin of Seaside, Oregon; Shawn Martin of Vancouver, Washington; Jessie Erhardt of Seaview, Washington; and his five grandchildren: Hayden, Ethan, and Aaron Erhardt; Callan and Marin Martin. A private family service is planned. In lieu of flowers, the family is requesting donations to the American Cancer Society.