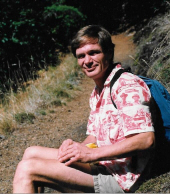 John Michael (Mike) McCauley was born in Portland, Oregon, to parents James Robert (Bob) and Gladys Ernest) McCauley. He attended Roosevelt High School, Reed College, University of Oregon (BA - Mathematics in 1960), and Portland State University (MS -Economics in 1975). Early in his career, he was an accomplished economist, working for the State of Oregon, Secretary of State, Department of Employment, the Hyster Corporation and Bonneville Power Administration. He also worked at Portland's famed Vat & Amp Tonsure restaurant. He moved to Seaside to help care for his ailing parents; then to Astoria where he lived until his death. While living at the coast, Mike worked at the Ship Inn Pub & Amp Restaurant. Mike enjoyed taking walks, listening to music, recording cassette tapes and writing poetry. His brother James Daniel (Dan), daughter Ann Margaret (Meg), granddaughter Estella Pecoraro, and a large group of very dear friends survive Mike. His first wife, Ann Goddard Jackson lives in Portland; his second wife, Jann Ingle Dryer died February 25, 2013. Friends and family are invited to a wake in Mike McCauley's memory on Saturday, December 3, 2016, at 3 pm at the Ship Inn in Astoria. Donations in Mike's name may be made to: Wildlife Center of the North Coast (Astoria, OR), The Carter Center (Atlanta, GA), FINCA International (Washington, DC), Inc. or Sisters of the Road Caf (Portland, OR). Thank you for visiting Hughes-Ransom and leaving a message for the family.