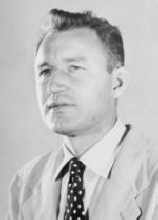 John passed away peacefully on April 6, 2013 in Seaside, Oregon, with his family at his side.
Born in Astoria, Oregon, to Dominc Pincetich and Mary Dragolic, John attended grade school and graduated from Astoria High School. He attended University of Oregon briefly before enlisting in the US Navy and serving in WWII as a Navel pilot, including aircraft carrier flight duty in the Pacific.
It was on leave from the Navy in 1939 that John met his future wife, Marjorie "Jerry" Dale Chessman.
After the War, John and Jerry lived in Hawaii, raising their family of sons John, Daniel and Michael. Little son John, "Sperky", died at age 4 yet he always remained present throughout John and Jerrys lives. After a successful career in Hawaii and California, John was asked to join the Peace Corps when it started in the mid-60s. He and Jerry spent a decade in Nigeria, Micronesia, and Malaysia as leaders of thousands of young volunteers. Countless friendships were formed in those years.
Johns humanitarian drive led him to work for Common Cause in Washington, D.C., direct Hawaiis Bicentennial celebration of 1976, and, in 1981, he and Jerry returned to Nigeria to work on clean water projects with Unicef.
Finally, John and Jerry settled in Gearhart in the late 1970s, built a house,and joined the local community they knew during WWII. Johns loving partner, Jerry, died in 1992, after which John would leave the normal small town life and spend more years working overseas for the betterment of peoples lives. During these years, John somehow also served several terms on the Gearhart City Council and other civic positions.
Throughout Johns world-wide travels and assignments, he and Jerry formed so many lasting friendships from so many different cultures. Yet John always kept family first and for almost 15 years hosted his sons, and grand and great grandchildren to a Thanksgiving gathering in Hawaii.
John leaves behind his children, Michael and Daniel, grandchildren John, Andy, Christopher, and Brian, and great grandchildren Seth, Giselle, Jonah, Genevieve, and Zane.
There will be a Rosary at 8 pm on Friday at Hughes-Ransom, Seaside, and a Mass at 11 am on Saturday at Our Lady of Victory, Seaside, followed by burial at Ocean View Cemetery.
To order memorial trees or send flowers to the family in memory of John Pincetich, please visit our flower store.