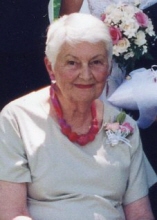 "Just as the bloom is the beauty of the rose, a mother is the glory of her family" Josephine Hope Moberg, 98, passed away peacefully on January 31st in Astoria, Oregon with her family by her side. Hope had lived in the same home, in Alderbrook for over 75 years. She was one of the oldest living students of Star of the Sea School, graduating in 1934, and was a member of St. Mary's Catholic Church for over 95 years. Josephine Miles was born March 4, 1916 in Dahlia, Washington across the Columbia River from Tongue Point. Born of Jesse Haines Miles and Eliza (Elliott) Miles, was the second youngest of 8 children. Hope moved to Astoria when she was 3 years old and witnessed the 1922 Astoria and Hammond Mill Fires. Hope attended school in Portland and worked for the Oregon Milk Board as a stenographer. Hope was involved in the fishing industry and cooked on the seining grounds, working with many of her 7 brothers and sisters on Kaboth Sands Seining Grounds. She later assisted and helped her husband in the family gillnet cedar float making business at the foot of 49th street in Astoria. She also worked hard as a homemaker and supported her husband and family as they fished the Columbia River. She then spent summers caring for the remaining family as her husband and family traveled to Bristol Bay Alaska. After her husband, David E Moberg, passed away she worked into her eighties for Columbia Chocolates. Hope was a direct descendant of Chief Comcomly and was a proud member of the Chinook Nation. She was the family historian, knowing and loving the history of each Chinook ancestor and many of the Astoria population and their heritage. Hope was first and foremost a loving mother, grandmother, and great-grandmother. She always had a warm household, greeting anybody that visited, including family, neighbors and friends. She always had sage advice and was a positive influence on all family members that came into her household of 75 years. She found great happiness in the tranquility and the beauty of her home overlooking the river and the sometime demanding nature of raising a family which she thoroughly enjoyed. Hope's Catholic faith was her life. Catholic missionaries & priests celebrated mass at the family home on the Washington shore of the Columbia River. Hope taught "Sunday School" for years at St. Mary's and was involved with the St Joseph Altar Society Birthright and other church ministries. She was also an associate of the Sisters of St. Mary of Oregon in Beaverton. Hope had visited with family, friends and neighbors throughout the last weeks of her life, always completing the crossword puzzle in the paper (usually within an hour or two). She was an avid reader of books and would read newspapers from cover to cover. Hope simply left us, last Saturday, to go to heaven to be with God and her family. All who knew Hope will miss her greatly but she continues to live within us. The impact that Hope had on so many will live on and on and warm our hearts until we all meet again. Hope is survived by her sons Jon D. Moberg of Salem, OR, Alan M. Moberg of Keizer, OR. And Robert M. Moberg of Seaside, OR and daughter Marcia Putman of Gearhart, OR. 14 Grandchildren, 20 Great-Grandchildren and numerous nieces and nephews and dear friends Debi Curl and her husband Jerry. She was preceded in death by her husband David E. Moberg and her son Thomas L. Moberg. The Rosary will be held Thursday, January 5th at 7:00 PM at Hughes-Ransom Mortuary in Astoria. Mass of Christian Burial will be held Friday, January 6th, 2015 at 2:00 PM at St. Mary Star of the Sea Catholic Church in Astoria, OR. A committal service will follow at Greenwood Cemetery. Following the committal there will be reception at Star of the Sea Auditorium. Memorial contributions may be made to St. Mary's Star of the Sea memorial fund or St. Vincent de Paul.

St Mary Star of the Sea