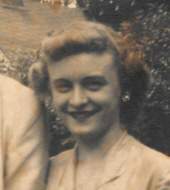 Joyce Jane Wilson, born December 6, 1935 in Portland, Oregon and passed October 2, 2016 in Warrenton, Oregon. Joyce, our Mom, wore many hats. When we were young, she was a stay-at-home mom at which time she volunteered in our grade school, helping in the library. She was also involved at Oak Grove Bible Church, teaching Sunday School, Vacation Bible School and was leader of the Pioneer Girls Club. Later she worked as a substitute cook at the North Clackamas School District and while in Oak Grove she was active in the Special Olympics program. After she retired from the School District she worked as a secretary at the Milwaukie Elks Lodge. She then followed her love for boating and volunteered her time to the Sea Scouts, where she earned her license as a 100 ton Merchant Marine Captain. During this period she was awarded one of the highest honors in the Boy Scouts of America, the Silver Beaver Award. Later she joined the U.S. Coast Guard Auxiliary and the U.S. Power Squadron, eventually serving as Flotilla Commander and Squadron Command, where she taught boating safety classes. She was also a C.G. Auxiliary Crewman, Vessel Examiner and had several 100's of hours of boating patrol duty. For many years she did a large number of boat safety checks during the Buoy Ten Fishing season (her favorite saying was, "wear your life jacket, we want you to come back.") In 2001 she received the Coast Guard Auxiliarist of the year award for the 13th Coast Guard District. For a number of years she worked at Camp Rilea as a house keeper. She was a Deacon and Usher at Pioneer Presbyterian Church and assisted with banking at the Warrenton Senior Center. Mom had a dynamic personality, she loved the outdoors and watching sunsets and astronomy. She was loved by all and will be greatly missed. Joyce was married to Warner Fred Wilson for 47 years (deceased) they had 5 Children, 4 Grand Children and 7 Great-Grand Children. Her Children; David Wilson, Richard and Tammy Wilson, Patrick Lee Wilson, Bonnie and George Kozowski, and Mary Wilson. Grand-Children; Jennifer Wilson (Deceased) Kristina and Abraham Honma, Danelle Lowrey and Justin Lowrey. Great-Grand Children; Julien, Jackson, Porter and Nolan, Elias and Akio, and Ava. Joyce also had a very special friend she loved very much, and who loved her just as much, Jack Bradbury. She also loved her sister-in-law Sandy Graham and her brother, the late William (Bill) Graham, and her brother-in-law, Gary Goins and her sister, the late Elsie, very much. Thank you for visiting Hughes-Ransom Mortuary & Crematory at hughes-ransom.com to share memories and sign the guest book.