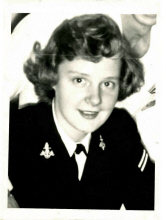 Born in New York City, New York and lived in Washington and Oregon for the past 36 years; her New York temperament never left her. Her mother was Jeanette Danish and father Roland Mamlock, and later Fredrick Borger. She graduated from John Adams High School in Islip, NY in 1948 and after a short stint as a telephone operator joined the U.S. Navy in 1949. She married John Jay Tilley, Jr. in 1950 at the Naval Chapel of the Chimes in Oakland, CA. They had three children, Douglas (Debbie Eastman) of Prescott Valley, AZ, Colleen (Richard Gustafson) of Astoria, OR, and Michael (Cindy). Michael died in 1999. Her adopted daughter is Carolynn Lowery (Lott) of CA. Her grandchildren are Brian, Shannon (Rick Seymour), Hayley June Tilley Gustafson (Jeff Linquist), Colin Gustafson (LeeAnn), Tyler Gustafson (Brooke), and Danielle Gustafson. The Gustafson great-grandchildren are Colton, Aiden, Alayna, Ayla, Natalie, Kellen, Elin, Soren, and Priya. Her newest great-grandchildren are Lincoln James Tilley Seymour and Jay Richard Linquist. Prominent in her life are her brother Gerald Borger (Mickey) of NY and brother-in-law James Tilley of CA. If you were one of June's friends you were indeed fortunate. She loved her friends and family with intensity and commitment that insured a lifetime of support and unconditional love. You could ask her to do any task and could be well assured that it would be done. She worked in the Miller Place Post Office, NY for thirteen years; she was the window clerk that patrons would wait for. June and John spent many hours in courthouse basements researching their genealogy. She retired in 1981 to care for her husband who died in 1988. She adored the Navy and she loved to travel. She visited all over the United States and Canada. She went to China, Thailand, Hong Kong, and England. She loved meeting new people and there was never anyone who she wouldn't strike up a conversation with. She particularly liked train travel. She was hilarious and will be missed for her story telling. She was an avid reader. She appreciated good food and going out to dinner where she always grabbed for the check. June was a dog lover and one of grandma "brag books" was her "grand dogs". She enjoyed the comradery of BINGO at the Astoria Senior Center and her friends at the Clatsop Retirement Village. June was a member of the Daughters of the American Revolution, Northwest Pacific Waves, Waves National, and was a Red Hat. Memorial Service will be held on Saturday, April 22, 2017 at Hughes-Ransom, Astoria at 1:00 followed by a reception at the Astoria Senior Center. Contributions can be made in her name to any children's hospital or the the Clatsop County Animal Shelter or your local animal shelter.