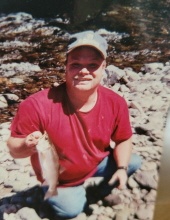 I miss him so much. He always had a big smile for everyone and a big heart, but his heart failed him on January 4, 2021. He loved his sons Robert Leslie Rooney, age 12 Ronny Russell Rooney age 10 so much. His boys were named after grandpa Rooney and grandpa Les Ronny Russell Rooney, best friend Ron Hopla and great grandpa Russell.

Keith graduated from Seaside High School in 1986 and went to Mt. Hood College for a short time before joining the U.S. Army in 1988. He attended Boot Camp in Ft. Bragg, North Carolina and then was stationed in Germany where he was trained as a Combat Engineer. Once he was out of the Army, Keith moved to Alaska to work with his dad as a heavy equipment operator. Most recently, he worked as a driver Clean Sweep, owned by Ben and Tammy Olson. We lived in a logging camp in Thorne Bay, Alaska from 1969 to 1974. Keith attended 1st grade there. He became a big brother when his sister Shannon was born in Ketchikan, Alaska in 1971.

Baseball was Keith’s favorite sport growing up. From “Pee-Wee” to varsity, we never missed a game. Keith was a catcher for all 4 years on varsity. He had a lot of respect for coach Jim Auld from whom he learned a great deal.

Keith had a lot of friends and family. He is survived by his dad Robert Rooney (Sandee) in Fairbanks, Alaska, and his mother Deanna and step father Les Philbrook of Seaside, Oregon.

Dusty Cheuvront was always a big part of Keith’s life. He has always been a big part of our family. He was like a son to Keith and Keith was so proud of him. Dusty is now a Staff Sergeant with the U.S. Marines. Keith was close to Dusty, his wife Rachell and their kids Baily, Zeke and Ellie.

Keith was a great father. He raised his children by himself with a little help from Grandma Deanna.

I love you son and miss your daily phone calls.


Love you forever,
Mom
When I am gone, release me – let me go
I have so many things to see and do.
You must not tie yourself to me with tears
Be happy that we had so many years. I gave you love,
you can only guess, how much you gave me in happiness.
I thank you for the love each have shown,
but now it is time I travelled alone.
So grieve awhile for me if grieve you must,
then let your grief be comforted by trust
It is only for a while that we must part
so bless those memories within your heart.
I will not be far away, for life goes on.
so if you need me, call and I will come.
Though you cannot see or touch me, I will be near
And if you listen with your heart, you will hear
All of my love around you, soft and clear.
Then when you must come this way alone,
I will greet you with a smile and “Welcome Home”

We would like to thank everyone who was so kind in sending flowers and cards and and making condolence calls. We would also like to thank Providence Seaside and St. Vincent Hospitals for taking good care of Keith and for everything they did. We appreciate it.

Thank you from the Philbrook and Rooney Families.
To order memorial trees or send flowers to the family in memory of Keith Alan Rooney, please visit our flower store.