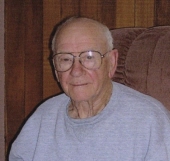 Kenneth LeRoy Heater of Astoria passed away on July 6, 2014. He was 86. Kenneth was born May 13, 1928 in Bethlehem, Pennsylvania to LeRoy and Theresa (Nagy) Heater. Ken enlisted in the United States Navy and served during World War II. Ken married Jean Troppa on May 17, 1947 in Naselle, Washington. He was later the owner and operator of C & C Body Shop. Ken loved the sport of Baseball, he enjoyed coaching as well as watching a good game. In his spare time Ken liked working in his vegetable garden. He also loved raising animals, it was like he had his own little animal farm. Ken was also a member of the American Legion. He is survived by three sons; Randy of Salem, OR, James of Astoria, OR, and Douglas of Warrenton, OR, five grandchildren and five great-grandchildren. He is preceded in death by his wife Jean on February 11, 1987 and son Brian Lee on February 16, 1954. A visitation for Kenneth will be held Tuesday July 8, 2014 from 12:00 to 5:00 PM and Wednesday July 9, 2014 from 9:00 AM to 1:00 PM at Hughes-Ransom Mortuary in Astoria. A Graveside service will take place Wednesday July 9, 2014 at 3:00 PM at Ocean View Cemetery in Warrenton. A celebration of life service will follow the graveside at Warrenton Community Center 170 SW 3rd St. Warrenton, Oregon 97146. Memorial contributions may be made in Ken's honor to Loaves and Fishes at 565 12th Street Astoria, Oregon 97103.
To order memorial trees or send flowers to the family in memory of Kenneth LeRoy Heater, please visit our flower store.