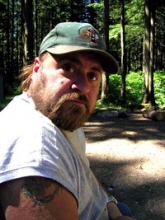 Kevin Lynn Cook was born December 15, 1970 in Coos Bay, Oregon to Russell O. and Barbara Swanson Cook. Kevin lived in the Jeffers Gardens area and attended Lewis and Clark Consolidated during his K 2nd grade years. In 1979 he moved to Warrenton and attended school there for the 3rd through 12th grades, graduating in 1990.
Kevin was a life-long resident of Clatsop County and will be remembered for his out-going and often goofy personality, and for his willingness to help others with mechanical and other needs.
During his life, Kevin worked at several local canneries and made several trips to Alaska to work on crabbers. On one trip in particular he left the processor to work on a crabber. Following his Alaska adventures, he worked at the Pig & Pancake in Seaside in both the restaurant and Convention Center under the supervision of his good friend Don Hall. Kevin also worked many years at Lektro at the Warrenton Airport.
Kevin loved the outdoors and being outside or in his shop tinkering with his many projects. If he wasnt customizing his motorcycle or quad or vehicle he was building a barbeque from a barrel or making racks and bumpers with metal fabrication. He could make anything out of nothing and his metal fabrication was a marvel to see. He was a good friend and had many good friends who always gave a helping hand and he was quick to do the same for them. He was loved by all. He spent many hours on the river beach walking with his dog, scrounging for wood or casting a line for salmon. He was both an avid fisherman for salmon and trout and a hunter of elk and deer. He was a real crack shot too. He was a member of the ATV club Pacific Trail Riders and spent many days and hours cleaning and trail blazing on Mt. Nicolai.
Kevin was preceded in death by his brother Nathan R. Cook who died February 7, 1998. He is survived by his parents, Russell and Barbara Cook, his sister Brenda Lee Hubbard, his niece Brittany Hubbard, his aunt and uncle, Kenneth and Dana Swanson, and his aunt and uncle, Sue and John Wall.
Memorial contributions to Warrenton Volunteer Fire Department can be made care of Hughes-Ransom Mortuary, 576 12th Street, Astoria.
To order memorial trees or send flowers to the family in memory of Kevin Lynn Cook, please visit our flower store.