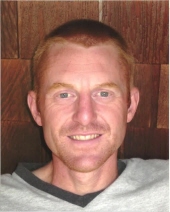 Kyle Phillip Jacobson went home to Jesus on June 5, 2015, at the age of 41. Kyle will be remembered by loved ones as an energetic, tenacious, hard worker who generously offered his hands and abilities to serve those around him. He was a sincere man who ardently lived out his convictions. Kyle grew up in Cottage Grove, OR until he moved to Knappa, OR at age 17. While still in high school, he worked washing crummies and log trucks for Teevin Bros. He graduated from Knappa High School in 1992 and began work as a logger. Over the years, he was employed by Nygaard Logging, Morisse Logging, and Teeven Bros. Kyle also worked for Ocean Beauty Seafoods from 1995 to 2000, and he had the honor of serving as youth pastor at his church, Knappa Assembly of God, from 1998 to 2003. On July 9th, 1994 Kyle married his high-school sweetheart, Cara Lyn Rodli. Kyle and Cara were blessed with six beautiful children. Kyle delighted in his family, and faithfully made caring for them his highest priority. Kyle preferred to be active, and appreciated the outdoors. He spent time deer and elk hunting and loved staying at his dad's cabin in La Pine, ORespecially in the winter. He enjoyed riding dirt bikes, four-wheelers, and snowmobiles. Kyle was known to enthusiastically sing along with his favorite country music and Christian worship songs. He was also famous for his meticulous auto detailing, and enjoyed using this skill to bless friends and family. Kyle is survived by his wife of 20 years, Cara Jacobson of Knappa, OR; children, Daisha, Tyrel, Bodean, Marshall, and Hadassah Jacobson; parents, Gary and Debbi Jacobson of Junction City, OR, and Joe Carson of Drain, OR; sister, Andrea Weaver of Brownsmead, OR; brothers, Nick Jacobson of Knappa, OR, and Derek Jacobson of Hoenfels, Germany. He is also survived by his maternal grandmother, Dorothy Flemming of Veneta, OR; and his paternal grandmother, Patricia Jacobson of Junction City, OR. Kyle was preceded in death by his daughter, Wilena Marie. A Celebration of Life gathering is planned for July 11th, 2015 at 1:00 pm at Knappa High School, 41535 Old Hwy 30, Astoria, OR.
To order memorial trees or send flowers to the family in memory of Kyle Phillip Jacobson, please visit our flower store.