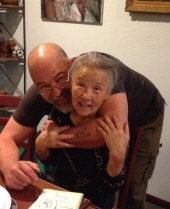 Kyong "Kim" Sun Fuhrmann, known throughout the community as Kim of Kim's Kitchen, passed away peacefully January 8th, 2017, at Avamere Memory Care and Assisted Living facility in Seaside, Oregon. Born approximately in 1932 to a farming family in South Korea, and orphaned at the age of 4, she spent her childhood years working in various households as a domestic servant. As a young adult she was employed as a cocktail waitress at Yongsan Garrison and Uijeongbu U.S. military bases from 1955 1974. During those years she cultivated a stable life for herself and her son, including the building of her own home. In 1973 she married Captain Richard Fuhrmann and moved to the U.S in 1974. Their first stateside home was in Neosho, Missouri where Richard attended trade school before settling in Astoria Oregon in 1975. Kim, determined to not carry a 30 year mortgage, paid off the family home, working double shifts at Astoria Seafood Company as well as other numerous canneries along the riverfront. Her last shift filleting fish was at the Hanthorn Cannery, where her name remains on display with other former cannery workers. She paid off the mortgage in 9 years. In 1986 she opened Kim's Kitchen on 14th Street, currently home to Albatross & Co. Her restaurant quickly became a local favorite, known for her excellent home style food, her generosity and graciousness. Her menu included what she knew best, fish and Korean food, always prepared with love. When her husband Richard became ill she closed her 14th Street location in order to take care of him. Upon his passing she reopened her popular restaurant in 1998 in Warrenton, where she continued serving her world famous fish & chips, bulgogi and kimchi until 2013. Due to failing health (not being able to pick up and fillet a 100lb halibut by herself any longer) she was forced to close. Her indomitable spirit took her far, without any education, not reading or writing even her own native language, she provided for herself and her family through sheer determination and a strong work ethic. She enjoyed traveling the United States, visiting many of the country's national monuments. She also had a great love for animals, always surrounded by her dogs. Kim had little time for leisure, but did enjoy fishing, her biggest pride and joy (aside from her son) came from cooking and seeing a satisfied customer. She is survived by her son Andy (Pyong Gujuan Kim) Fuhrmann and his partner Teri Sund, five grandchildren Joseph Lowrie, Kimberly Fuhrmann, Drew Fuhrmann, Kate Sund, Greer Sund, one great-grandson, and numerous close friends whom she considered extended family. Public viewing will be held at Hughes-Ransom Mortuary on 576 12th Street, Astoria OR 97103 Jan 12th and 13th from noon to 5:00pm and on the 14th from 11:00am to 3:00pm. A public memorial service will be announced at a later date. In lieu of flowers, please make donations to Clatsop County Animal Shelter in her name. Thank you for visiting Hughes-Ransom Mortuary & Crematory at hughes-ransom.com to share memories and sign the guest book.