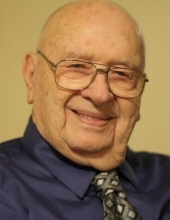 Linus H. Seger, 92, passed away on Friday, September 20th in McMinnville, Oregon. A rosary Mass will be held at 10:30 a.m. Saturday, October 5th with an 11 a.m. Mass service to follow at St. Mary, Star of the Sea Catholic Church in Astoria. Friends and family are welcome. Reception to follow at St. Mary. Linus was born on September 2, 1927 in Dubois, Indiana to Frank and Margaret (Schmitt) Seger. Linus was preceded in death by his brothers, Francis, Alvin, Charles, Bernard, Cletus, Claude, James and his sister, Florentine Mathias. He is also preceded in death by a daughter, Sharon (Jackson) Morgan, wife Deloris (Riehl) Seger, and wife June (Lockwood) Seger. Linus is survived by three daughters, four sons, and numerous cousins, nieces, nephews, grandchildren, great grandchildren, and great-great grandchildren. Linus lived a life of service and was always willing to serve others and his church, St. Mary, Star of the Sea Catholic Church. Linus owned and operated an adult foster home in Astoria, Oregon for 15+ years. He was very proud of his adult foster home and the service he provided to the residents and their families. Linus will be remembered for his service to others, the love of the Catholic Church and his Bible, his love of some good fried chicken, being an all-star noodle ball partner at Life Care Center of McMinnville, and his constant flirting with the ladies. Memorial contributions can be made to the St. Mary, Star of the Sea scholarship fund account.