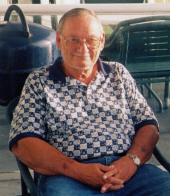 Alonzo "Lonnie"Gilbert Dunn, Jr. of Warrenton, Oregon passed away Wednesday, October 8, 2014 at the age of 74. Lonnie was born February 2, 1940 in Baker, Oregon where he was raised in a loving home by his adoptive parents Alonzo "Hap" and Madge Dunn. Lonnie graduated from Baker High School where he was a stellar athlete in both Football and Track. In 1959, Lonnie married his high school sweetheart Naomi J. Frost in November of 1959. Together they had four children in less than four years; Ronnie, Ricky, Randy, and Tami. Their married life was an adventure lasting 48 years before Naomi's passing in 2007. Together they created wonderful and countless friendships. Lonnie was an Oregon State Police Trooper for 14 years, a United Parcel Service (UPS) Driver for 14 years, and then drove locally for HGH Trucking before officially retiring in 2007. Lonnie enjoyed working and being around his co-workers. After retiring, Lonnie enjoyed working in his yard, spending time at the Hammond Viewpoint, and most importantly spending time with his family and friends. Lonnie was active his entire life and was always looking to have fun. His deep love for his children and grandchildren was obvious to anyone who knew him. Lonnie was well known for his quick wit and jokes. He was bright, direct, yet "somewhat mischievous" with his family and friends. Lonnie knew no stranger and was always willing to help others in need. His laugh was infectious and will be missed by many. Sports were very important to Lonnie. For years, Lonnie was both a coach and League President for the Astoria Little League and Babe Ruth Baseball. Lonnie enjoyed NASCAR Racing and was an avid San Francisco 49ers fan. His home was always decorated with 49ers gear throughout the football season. For years Lonnie was a member of the North Coast Cruisers Car Club where he proudly displayed his 1951 Chevrolet 2-Door Coupe. Lonnie was also a member of the Astoria Moose Lodge. In 1992, Lonnie had the great pleasure of finding and eventually meeting his biological mother, Ms. Charlene Melton. He then discovered he had five biological sisters and one biological brother. Lonnie cherished the times spent with his mother and siblings. Lonnie is survived by his four children Ron (Kim) Dunn from Days Creek, Oregon., Rick (Jewell) Dunn of Olympia, Washington., Randy (Orchid) Dunn of Warrenton, Oregon., and Tami (Paul) Faist of Aloha, Oregon., sisters Marilyn Melton, Carolyn Andel, Edith Kepley, brother Jim Melton., and numerous grandchildren and great grandchildren. Services will be held at 11:00am on Friday, October 17, 2014 at The First Baptist Church, 30 NE 1st Street, Warrenton, Oregon, 97146. A Celebration of Life will then be held at 2:00pm at the LOFT at the Red Building, 20 Basin Street, Astoria, Oregon. Please be sure to sign the online guest book at www.hughes-ransom.com
To order memorial trees or send flowers to the family in memory of Lonnie G Dunn, please visit our flower store.