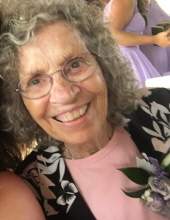 Lori was born January 29, 1942 in Flint, Michigan to Leonard and Marguerite Sanford. After the death of her mother, her family relocated to Charlevoix, Michigan in 1946, where she was raised with the help of her grandmother.

Lori was the youngest of five children. Raymond "Ray", Robert "Bob", and Lucille (Allard) all preceded her in death. Richard Sanford survives in Michigan.

Lori graduated in Charlevoix. In 1961, she married Jim Lewicki. The two had three sons and were later divorced. In 1978, she married Steve McSwain in Astoria, Oregon. They had one son. Steve preceded her in death in April 2000.

In addition to her brother, Lori is survived by four sons: Tim (Julie), Tom (Michelle) and Trevor (Danielle) Lewicki, all residing in North and South Carolina, and Adrian (Melissa) McSwain of Astoria, Oregon. Lori is also survived by eight grandchildren, five great-grandchildren and numerous nieces and nephews.

Lori worked in many careers before becoming a school bus driver in Astoria, where she was known and remembered fondly. After her retirement, she enjoyed sewing, sharing stories and photos of her grandchildren and traveling to see her grandchildren. She was a constant fixture at sporting and 4-H events in support of her granddaughter Baylee.

Interment will be private. A celebration of life will be announced by her family at a later date.

In lieu of flowers, donations may be made to the American Cancer Society or the Clatsop County 4-H Club.
To order memorial trees or send flowers to the family in memory of Lorian Marie McSwain, please visit our flower store.