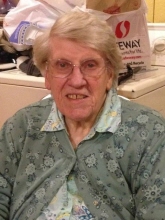 Lorraine Minnie Spillman of Seaside died July 18, 2014 at home with her family by her side. She was 89. Lorraine was born December 8, 1924 in Albert Lea Freeborn, Minnesota to Oscar and Clara (Rushfelt) Hamburg. She was raised on their family farm with her three brothers. The family raised many animals including: pigs, milk cows, laying hens, and baby chicks and farmed around three hundred acres of land. She grew up knowing what hard work is. Lorrain's mother died in January of 1944 and that is when she had to learn how to cook and became the woman of the house. Lorrain married John R. Spillman on December 23, 1946 in Portland, Oregon. She was a Navy wife for 20 years and they had six children. Some of her career work included being a caregiver, house cleaner, she worked at the dry cleaners at tongue point for the navy, and she was also a house wife and raised her children and grandchildren. In her free time Lorrain enjoyed ceramics, canning, she loved dancing, listening to Elvis music, she was in charge of poppy sales for the American Legion, and had a passion for volunteering. Lorrain enjoyed traveling and has visited 28 different states. She was also a member of the American Legion and the Moose Lodge. She is survived by her six children; son, Mike Spillman of Anchorage, Alaska; daughter, Johnnie Wolfe of Idaho City, Idaho; daughter, Jackie McClure of Naselle, Washington; son, Dan Spillman of Anchorage, Alaska; daughter, Kelee Tate of Jewell, Oregon; and son, Pat Spillman of Seaside, Oregon; 18 grandchildren and 20 great-grandchildren. She is preceded in death by her husband John, grandson Jessee Mulkey, her three brothers Clifford, Marvin and Melforg and her parents. A memorial service will be held on July 27, 2014 at 2:00 PM at the American Legion in Seaside. Memorial contributions may be made in Lorrain's honor to Abused Women & Children or the Seaside Fire Department. Hughes-Ransom Mortuary in Seaside is in charge of arrangements. Visit www.hughes-ransom.com to leave condolences and sign the guest book.
To order memorial trees or send flowers to the family in memory of Lorraine Minnie Spillman, please visit our flower store.