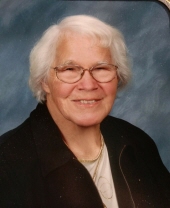 Mabel Mathilda Kandoll Herold passed away on March 1, 2018 at her residence in Yelm, Washington. She was 101 years old. Mabel was born on December 18, 1916 to Emil Kandoll and Johanna Amundsen Kandoll. Stormy weather had prevented her mother from getting across the river to the hospital in Astoria so she was born in her grandmothers store in Rosburg, Washington. She grew up on the family farm along the banks of Grays River. Water played an important part in Mabel's life. She spent her childhood days swimming in the river in front the family home and went on to learn how to use a rowboat to get to school. She graduated from Naselle High School in 1936. Mabel married Milton Herold in Astoria December 13, 1941; two months and 10 days later her husband shipped out to honorably serve his country in the US Navy. He spent the next three years in the south Pacific. After Milton was discharged from his Naval service the couple returned to Astoria, buying a house in John Day where she lived until health issues forced her to move. They went on to have four children together: Joyce (Jim) Fisher, Bill (Helen), Jim (Mary Ann) and Bob (Vicki). She was a consummate mother. Mabel was known to mother numerous chicks, kittens and lambs. It would be accurate to say that Mabel's spiritual faith and her love of family were the foundation of her life. She filled her days with church activities, leading 4-H clubs, gardening and enjoying the fellowship of the Fernhill Progressive club. In later years she enjoyed trips with her son Jims family. She was preceded in death by her parents, her husband Milton in 1985 and her three brothers. She is survived by her four children, their spouses, six grandchildren, six great-grandchildren along with many nieces and nephews with one very special niece, Beth Kandoll. Mabel will be interred privately next to her husband at Ocean View Cemetery in Warrenton, Oregon. A celebration of her life will be held on April 14, 2018 at the ILWU Hall in. Memorial contributions may be made to South Sound Hospice through Providence St. Peter Foundation, Clatsop county 4-H, Astoria Aquatic Center, or Loaves and Fishes.