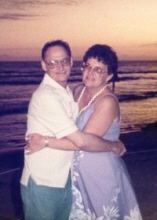 Madonna Marie Pitman, wife, mother, sister, aunt, grandmother, great-grandmother and friend passed away peacefully at home on July 5, she was 74.
She was born September 6, 1938 in Minneapolis, Minnesota, to Earl and Esther "Sally" (Koski) Englund.
She met Billie Wayne Pitman in Seaside while he was stationed at the Astorias Naval Base in the mid 1950s. They got married on April 18, 1956.
They managed then owned and operated Pier Elevens Feed Store Restaurant and Lounge from the late 70's to 2003. Here they met many people and influenced the lives of their staff.
Madonna was an avid home craft maker and a cookery extremist. She also enjoyed her 3 best pets Mandy, Tiger & Buttons.
She is preceded in death by her husband Bill W. Pitman.
A celebration of life service will be held Saturday August 3, at the Seaside Elks Lodge #1748 at 3:00 p.m.
Hughes-Ransom Mortuary is in charge of arrangements.
To order memorial trees or send flowers to the family in memory of Madonna Marie Pitman, please visit our flower store.