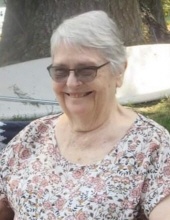 Marcella passed after a 2 ½ year battle due to complications of Pancreatic Cancer on January 27, 2022. She was born April 3, 1941 in Glasgow, Montana to Clarence and Engred Marie Eleanora Kulland. The family settled in Gearhart where Marcella was raised with her siblings on McCormick Garden Road. She married Robert Rider and they had two children Eleanora Marie and Robert Rav. After she and Robert divorced, Marcella and the kids moved back to Seaside and she went to work at Columbia Memorial Hospital where she met and married Robert Steward who proceeded her in death. When she was married to Robert, she went to work at the Holladay Drug Store until their closing. For many years her and her brothers played Mr. & Mrs. Claus at many holiday events in Seaside. While working at Holladay Drug she met and married her current husband, Robert “Bob” Chamberlin. After her retirement they traveled around the world and when at home, volunteered in Astoria when the cruise ships were docked at the Port. In addition to her husband, Bob, she is survived by her daughter Eleanora (Bob) Capaul; a son Robert Ray Rider; daughter in law Verletta (Rodney) Steward; step son Tom (Emmie) Chamberlin and step daughter Carol (Bryan) Schnetter; Grandchildren, Justin (Jessica) Capaul, RaeAne Capaul, Jeremy, Josh, Johnathan, Robbie and Elizabeth Rider along with step-grandchildren Megan Steward, Rob Johnson, Brian (Jennifer) Chamberlin, Andrew (Allison) Johnson and Breanne (Ryan) Duffy; Great Grandchildren, Kyler Brabeck, Landon, Logan and Lucas Capaul and Savannah Rider and step Great Grandchildren Ellis and Jovi Johnson, Along with her sister-in-law, Claudia Kulland Halliburton. Marcella is also survived by numerous nieces and nephews. Marcella is proceeded in death by her parents Clarence and Engred Kulland, siblings Crystal (Walter) Melhoff, Ervie (Sue) Kulland, Dutch Kulland, Carol (Jake) Webb, her husband Robert Steward and step-son Rodney Steward.
A celebration of life will be held for mom’s birthday April 2, 2022 at the American Legion in Seaside at 1:00PM. In lieu of flowers please make a donation to Gearhart Fire Department in memory of the Kulland family.
Marcella’s family would like to thank all of the doctors, nurses, and staff of Providence and St Vincent Hospitals in Seaside and Portland along with the staff from the Infusion Center, Home Health and Hospice along with many friends and family that helped to care for our mother.
To order memorial trees or send flowers to the family in memory of Marcella Marie Chamberlin, please visit our flower store.