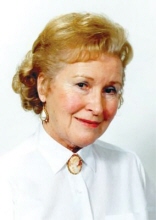 Margaret Frances Niedermeyer passed away February 18, 2014, in Portland, Oregon, at the age of 94. She was born July 20, 1919, in Toronto, Canada, to John and Alice (Whitfield) Allan. Margaret attended Long Branch Public and Continuation School, starting in 1925 and graduating in 1939. After graduating from Shaw's Business College in Toronto, she worked for a tea and coffee tasting business. During the war years, Margaret and a friend decided to come to the United States for excitement. At that time she went to work in several places as a secretary. She was a member of the secretarial association in Portland, Oregon. In 1960 she returned to Oregon and worked for the Niedermeyer-Martin Lumber Co. She married Ben Niedermeyer in 1981 and they moved to Gearhart. She traveled extensively over the last 45 years, going to Britain ten years in a row, enjoying Hawaii every year; there was no place she hadn't traveled. Margaret was very artistic. She was a graduate of Hazmore School of Dress Costume Design in San Fransisco. She was member of the Egg Artists of Oregon Guild. She made beautiful Faberge eggs and had many friends in this organization. No matter what she did , she did it well, searching out the best teachers and schools. Margaret was a member of the Sou'Wester Garden Club for many years, and her yard was always beautiful and impeccable. She was a member of the Community Presbyterian Church in Cannon Beach, Oregon. Margaret was a wonderful cook and hostess, and she loved to have parties for her friends. A memorial service was held at her home community in McMinnville, Oregon. Private interment was March 3, 2014, at Willamette National Cemetery in Portland, Oregon. Memorial contributions may be made to Sou'Wester Garden Club Scholarship Fund.