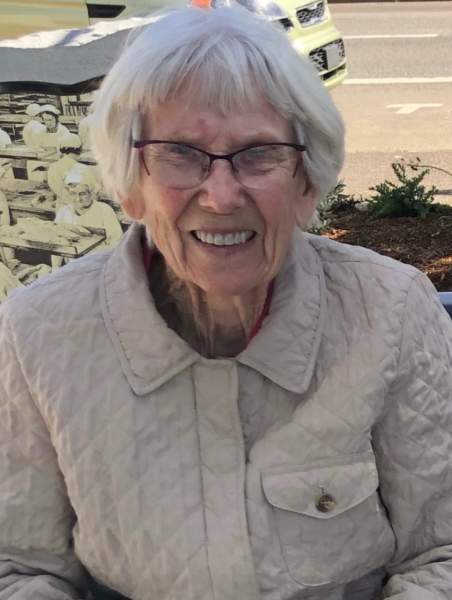 Margaret Frances Thompson was born in Astoria on November 17, 1928 to Frances
and Arthur Olson. She and her older brother, Eldred (Eldie), grew up in Alderbrook.
Both of their parents died when she and her brother were young, and Margie (as she
was known) assumed the care-taking role within the house—a role she played many
times throughout her life. After her father died, when she was a teen, she was cared for
by an aunt. Though her younger years were marked by tragedy and sadness, she
found happiness in her friendships, which spanned her entire lifetime.
Perhaps because her parents died when she was young, the notion of family meant
everything to her. She always wished to have a large family and that dream was
realized when she met her future husband, John (Dick) Thompson, at a dance at the
Brownsmead Grange in 1947. Dick came from a large family and they embraced her
fully. Margie and Dick married on June 4, 1949 and had a love affair that lasted over 60
years. Together, they built their family house in Astoria in 1966 and a duck shack in
Brownsmead in 1963. They loved to entertain in both places, travel, hunt and watch
beautiful sunsets together. Dick’s death in 2009 devastated her but she found solace
in her family and friends and a renewed purpose in volunteering.
Margie was an altruist at heart and through her 93 years, she volunteered many places
in Clatsop County. Columbia Memorial Hospital, Meals on Wheels, Finnish
Brotherhood, the Scandinavian Festival, SMART, the First Congregational Church, and
Anchors received countless hours of her volunteering time. Margie was very proud to
have christened the US minesweeper YMS 425 in September 1944 at Amco Shipyard.
Her father and other relatives had worked at Amco for years. When Margie wasn’t
helping organizations in the area, she was helping out family, friends and neighbors
(whom she considered family), reading, baking or walking the many hills of Astoria.
Margie was known for her Finnish cardamom bread. If you were fortunate enough to
be gifted a loaf during the holidays, you knew how fantastic it was.
Margie and Dick had three daughters together, Claudia, Cindy and Tronni. Margie
loved being a mother and cherished the job. She was active in their lives in every
possible way. While Margie loved being a mother, she may have loved being a
grandma even more. She had 7 grandkids, 10 great-grandkids and 1 (soon-to-be 3)
great-great grandkids. Margie took weight-lifting classes to prepare for great-grandkid
number 6 when she was 87. Up to and including a week before her death, she would
get on the floor and play games with her great-grand kids and would rarely let them
win.
Sometime after going to sleep on August 14th, Margie passed away peacefully in the
house she helped build and raise her family in, the home she had known for the last 59
years.

Margie was preceded in death by her husband, Dick Thompson, daughter, Tronni
Petersen, brother, Eldie Olson and granddaughter Tana Simonsen. She is survived by
daughters Claudia (Layne) DeLoff and Cindy Daly, Son-in-law Butch Petersen,
Grandkids Amy (Tim) Frei, Diana (Dean) Schroeder, Stefanie (Kris) Netherton, Jeff
(Shawna) Peterson, Kate (Alex) Wood and Adam Petersen and many great grandkids
and nieces and nephews.
There will not be a service but a donation in her name to the Assistance League of the
Columbia Pacific (PO BOX 596, Astoria OR) would have made Margie very happy.