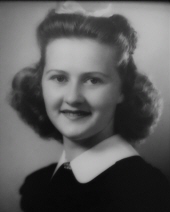 Margit Arnolda Lvvold Hendriksen Atwood died peacefully on March 26, 2018, in Eugene, Oregon. She is survived by four sons: Father Ronald E. Atwood of Palm Springs, California, Gary B. Atwood and James D. Atwood of Junction City, Oregon, and Myron B. Atwood of Terrebonne, Oregon. She is also survived by two daughters-in-law, five grand-daughters, eight great-grandsons and one great-granddaughter. She was 97. Margit Atwood was born on February 7, 1921 in Kjerringy, Nordland, Norway, a small Norwegian fishing village above the Arctic Circle. Her father, Valdemar Otelius Hendriksen, was a fisherman who like many Norwegians in search of a better life, emigrated to the United States in 1920. Margit, her younger sister Betsy, and their mother Mary followed in 1929, settling in a family home on 39th Street in Astoria and joining Hendriksen and Lvvold family members in the community. Valdermar worked as a fisherman and Mary was a housekeeper and worked in the canneries. Knowing little English, Margit enrolled in John Jacob Astor Elementary School in 1929, where she met her future husband, Ben Butterfield Atwood, in third grade. After graduating from Astoria High School, they married on September 20, 1941. Their family grew as Margit bore four sons during the 1940s. Margit was a sweet mother, mother-in-law, and grandmother, with sparkling blue eyes and a Scandinavian sense of humor. She and Ben raised their family in Portland and later, in Albany. While Ben traveled for business during the week, she ran a household of four growing boys with a kind-yet-firm hand. Known for her delicious meals, especially her Norwegian pancakes, she held command over the heart of the family home, her kitchen, and created many memorable Christmas gatherings. She owned and managed Jeans Health and Happiness for many years. She and Ben enjoyed a strong and loving union and friendship throughout their nearly 60-year marriage, before Ben passed away in 2001. They could often be found out on the town for dinner and dancing on a Friday night. Her strong faith and love of family shone through in her bright eyes and her words, even in her advanced years.
To order memorial trees or send flowers to the family in memory of Margit Arnolda Atwood, please visit our flower store.