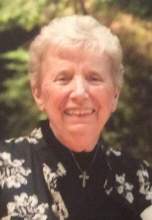 Marie E. Lampi was born to Leslie and Beatrice (Cowan) DeGandi in Portland, OR on December 5, 1937. Marie married Melvin on November 12th, 1955. Together they raised three daughters: Judith Lampi & Heidi of Warrenton, Janet Marambe (Arthur) of Portland, and Jody Longo (James) of Portland. Marie loved gardening and took a special interest in tending to the various species of ferns that grew on the property in Brownsmead. The extension of this passion translated through the natural talent she had for floral arranging. Marie also loved animals, but cats stole her heart. Marie was an excellent contract bridge player, and earned the title of Life Master. Her homemade cookies were legendary. Marie loved her family most of all. The annual Coates and Cowan family reunions brought everyone together to celebrate a heritage of family, friends, and faith. Maries ancestors trace back to the the Sons and Daughters of the American Revolution, who arrived in Oregon on a wagon train via The Oregon Trail. Marie departed this life on October 31, 2018 at the age of 80. Keeping with her wishes, Marie will be cremated and her remains buried next to her parents. She will be laid to rest at the family plot at Murray Hill Cemetery in Clatskanie, Oregon. Marie is survived by her Husband, Melvin and her daughters Judi, Janet, and Jody. Marie was one of eigth children: Bonnie Leistiko, Leslie DeGandi, Carol Brajcich, Patricia Humphrey, David DeGandi, William DeGandi, and Harry DeGandi. All, with the exception of Bonnie, preceded her in death. Grandchildren: Kenneth Marambe, Sarah Marambe, Cole Johnson, Adam Johnson and Emma Johnson. Great-grandchildren: Riley, Chloe, Kayah and Malia. Marie was also a favorite aunt to a host of nieces and nephews who will miss her dearly. A graveside service will be held at Murray Hill Cemetery in Clatskanie, OR. at 11:00 am on Saturday November 10th. A celebration of life ceremony will directly follow at The American Legion Hall in Clatskanie, OR. In lieu of flowers, donations can be made in her name to the Astoria Scandinavian Heritage Association, PO Box 34, Astoria, OR 97103 for the future park that will honor Scandinavian Heritage. Funeral arrangements are being handled by Hughes-Ransom Mortuaries & Crematory, Astoria. Visit the online memorial tribute to sign the guestbook, share a favorite memory or upload a photo(s), and more at www.hughes-ransom.com & www.facebook.com/hughesransommortuary/