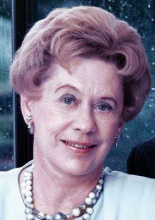 Marillyn Lois Leinassar Maher, 88, passed peacefully on Monday, Nov. 3, 2014, surrounded by her four children, Dr. Jeffrey M Leinassar DMD and daughter-in-law Cathy Leinassar, Terri June Read, Dr.Alan Scott Leinassar DMD, and Dr. Ronald Jorma Leinassar DMD. She was born in St Paul, Minn., on Dec. 31, 1925, to Clinton and Evelyn Banik. Her older brother, Clinton Banik, preceded her in death. Marillyn graduated from high school in St Paul, Minn., and began working at Anchor midway hospital in St Paul. Here she met Dr. Jorma Michael Leinassar MD, who was doing a medical residency at the hospital. A courtship began, and eventually Marillyn and Jorma were married in1946. Jorma preceded her in death in 1986. Upon completion of Jorma's residency, Marillyn and Jorma moved to Jorma's hometown of Astoria, Ore. Marillyn is survived by her four children, three sons who all are practicing dentists, Dr. Jeffrey Michael Leinassar DMD of Astoria, Ore., Dr Alan Scott Leinassar DMD of Smith, Nev., Dr. Ronald Jorma Leinassar DMD of Gresham, Ore., and a daughter, Terri June Read, who is the administrator of hospice in Las Cruces, N.M. Marillyn married James T. Maher, retired Coast Guard, in 1994. James was group commander in Astoria in the mid-1960s, and friends with Marillyn and Jorma. Following his military retirement he returned to Astoria and was reacquainted with Marillyn. From age 68-80 Marillyn had 12 loving years of marriage with James. He preceded her in death in 2006. Marillyn always liked to say her job was a being a homemaker. Raising four children was her full-time job which she always enjoyed. She was always grateful that her four children chose to stay in school and out of trouble with the police! Marillyn was involved with a variety of civic organizations during her lifetime, which included the Grace Espiscopal Church guild, Columbia Memorial Hospital pink ladies, Rotary Ann, women's golf at Astoria Golf and CC, and wives of the original Astoria Clowns. Marillyn enjoyed playing bridge, being with her lady friends, watching golf with people, and snuggling on the couch with her Boston Terrier, Amy. She loved getting phone calls from her children and grandchildren. She is survived by 5 grandchildren, Tiffany Leinassar Vetere, Meghan Leinassar, Kristoffer Leinassar, Danielle Leinassar, Josh Leinassar, Captain Jason Read, and Erin Read; 7 great grand-children and numerous spouses, nieces, and nephews. Marillyn had asked for a small private family gathering and internment at Ocean View Cemetery. It was her wish to be buried next to Jorma and James. She has asked in lieu of flowers that any memorial gifts be made out to Grace Episcopal Church in Astoria, Ore. Hughes-Ransom Mortuary in Astoria is in charge of arrangements.