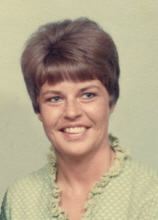 Marilyn Halbrook left this world peacefully on December 1, 2016. Marilyn had just celebrated her 78th birthday with family, friends and good food...just the way she loved it. Marilyn Halbrook was born in Grand Forks, North Dakota to Gunder and Muriel Paulson (preceded in death) on October 22, 1938 along with her beloved sisters, Ganet Moe (preceded in death) and Mary Kay Erickson (Seaside). The Paulson family moved in 1944 from North Dakota to Vancouver, Washington, and then in 1946 moved to Vernonia, Oregon, in 1952 they settled in Seaside where Marilyn graduated from Seaside High School in 1956. Marilyn worked at the Times Theater, Leonard's Candy Store and did some live in babysitting for Dr. McClean and after high school she worked for Avery Law Offices in Seaside. Marilyn and ex-husband, Harvey Wade "Swede" Halbrook (preceded in death) began life with their children; daughter Janet Halbrook, sons; Wade Halbrook and John Halbrook (Abby Tuers). Living in Portland, Oregon in 1960 Marilyn worked for a law firm. Marilyn and her children moved back to Seaside in 1963 where she lived until her peaceful passing in her home. Marilyn worked for Crown Zellerbach, Cavanham & Willamette Industries (same position) from 1965 until her retirement in 2000. Marilyn brought such joy, laughter and humor to any situation...never knew a stranger, considered by all to be a really good friend, always thinking of others. Marilyn was the one you called on if you needed something done and done right, she said, "if it had big plates" she would plan it otherwise is up to someone else. Her volunteerism proved that over and over be it for the SMART program, Miss Oregon Scholarship Pageant or Relay For Life. Marilyn was our matriarch and a planner, be it trips with her sister Mary Kay or family get togethers, Marilyn was the one to start the ball rolling. The laughter, the love, the adventures, the more the merrier. The last 6 years Marilyn has fought a long hard battle against cancer...she may have had cancer but cancer never had Marilyn...such incredible strength, dignity and humor.she never gave in or up. Heaven gained an amazing spirit in our Marilyn, those of us blessed enough to know and love Marilyn are better because of her, she will be missed by her family and many friends. She is survived by: her Niece; Kim Gould, Nephews; David (Tuf) Gould, Kevin Gould, Randy (Tammy) Moe and Scott Moe, Great Nieces; Nicole and Samantha Gould, Ashtyn Routh, Ronnie and Sydney Gould, Kaitlyn and Karlee Moe, Great Nephews; Gregg Gould, Joel and Beau Routh, Grandchildren; Jessica Heslop, Mindy Olsen, Job and Jalessa Johnson, Gunder Halbrook and Angela Tuers, Great Grandchildren; Alyssa and Madison Burmister, Zion Moore and Elisa Johnson. Some people come into our lives and leave quietly and others like Marilyn Halbrook leave footprints in our hearts, unforgettable. Those wishing to contribute in Marilyn Halbrook's honor may do so to Relay For Life of Clatsop County or Miss Oregon Scholarship Foundation; Marilyn "Pageant Angel" Halbrook annual memorial scholarship; PO Box 1032 Seaside, Oregon 97138. A Celebration of Marilyn's life will be held 1pm Saturday December 10, 2016 at the Seaside American Legion. Thank you for visiting Hughes-Ransom Mortuary to share memories and sign the guest book.
To order memorial trees or send flowers to the family in memory of Marilyn Jean (Paulson) Halbrook, please visit our flower store.