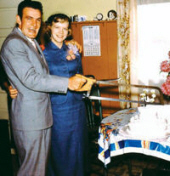 Marlys Elaine (Van Vleet) Breitmeyer, 79, passed away April 22, 2013.
Marlys was born January 19, 1934, in Pickardville, ND, to Elizabeth & Perry Van Vleet. She was youngest of 6 children. She had polio when she was young; it is because of her brothers and sisters she was able to walk. They would rub her feet for hours while she was sick, keeping up the circulation. This love of family traveled with Marlys all the days of her life.
Marlys Graduated McClusky High School in 1952, and worked at Bismark Hospital until she moved to Oregon and married Arthur Breitmeyer June 17, 1954.
Marlys was a mother, a homemaker and a hard worker. She always kept a job, helping support her family. She worked as a reporter for the Seaside Signal, then as a Bookkeeper for Bell Buoy Crab until 1981. She then went on to Borland Coastal Electric, finishing with Wadsworth Electric until her retirement in 2003. She was very loyal and dedicated to her employers through the years.
Marlys was very involved around town: A member of the Gearhart Volunteer Fire Dept. Auxillary, the Pythian Sisters and the Moose Lodge. She was also proud to be a member of Girl Scouts of America, and her adult troop, "The Gaubelstaufers," who were avid volunteers in the community. She maintained friendships with these women over the years.
Marlys enjoyed many things, but always loved activities that included her husband, Art. Together they were bowling enthusiasts, adding much wear to the lanes in Gearhart, and forming lasting friendships. The trophies earned were too many for one room, in their home on Cottage Avenue in Gearhart. They traveled during their retirement years, mostly south, to Reno or Vegas for warmth and gambling. Marlys was a dedicated Mother, taking in "those extras" that needed a place to stay. There are a few add-on children in the Breitmeyer family known as #5, #6, #7 & #8. Her generosity and quiet love was endless.
Marlys was preceded in death by her parents, her husband of 55 years Arthur "Art" (1932-2009), 2 sons Ronald (1962-1981), Daniel (1957-2004), and daughter Karen (1954-2005). Also her brothers James, Alan, and Donald, along with her sister Margaret.
She is survived by her daughter Ardy Breitmeyer of Gearhart and her sister Marion Yolk of North Dakota. Sister-in-Law Terry Van Vleet. Her grandsons Troy (& Kathy) Saunders of Grants Pass, OR, Son-in-Law Mike Saunders, Cole, Jesse, Adam, & Daniel Saunders all of Big Lake, AK, Cody Breitmeyer of Portland, OR. Granddaughters Ronnie Jo Gould of Seaside, and Sydney Gould of Gearhart. Four Great-Grandchildren; Samantha & Nathan Saunders of Grants Pass, Harlow Saunders of Big Lake, and the newest addition to the family, Trey Hackleman of Seaside. Of course, numerous nieces and nephews. Johnny Clarke, who helped care for Marlys the last 6 years, and Michelle Patopea Trott.
Memorial contributions can be made to a charity of ones choice.
Come celebrate Marlys special life with us, at a potluck gathering on Thursday, May 2nd, 2 p.m., at the American Legion Seaside.
To order memorial trees or send flowers to the family in memory of Marlys Elaine Breitmeyer, please visit our flower store.