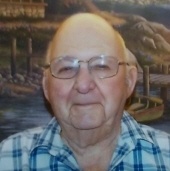 Marvin Ross Horn was born Nov. 21st, 1929, at Quinlin, OK. He was the tenth child of Franklin Horn and Rosie Anna Layne. He started life at a very trying time in American history, the Great Depression and the dust bowl days in Oklahoma. He was amazingly bright for someone who only completed a grade school education. He had a natural talent for building and fixing things. He left home at a very young age and spent time doing odd jobs, working as a ranch hand, and also spent time in the oil fields of the southern U.S. and Nevada. His travels took him to Colorado where he met Lily Shirley Randl. They were married on June 6th, 1950, and had three children, Shirley Ann Horn (Jon), Marvin Cal Horn and Donald LeRoy Horn (Jeff). After their divorce Marvin moved with his children to Oregon in 1957, marrying Dotty Darlene on the way. His second marriage sadly started with the loss of their first born son Michael. A daughter was born a short time later, Darlene Louise. Mike and Dotty divorced in 1990, and Mike spent his final years with Marion "Jean" Byers. Mike was the jack of all trades, and never shy about a hard day's work. No one was a stranger for long. Whenever he saw people struggling, he was always willing to lend a helping hand. He loved hunting, fishing (of any kind) clam digging, gardening, cooking and spending time with his family and friends. His home was always welcoming, and there was usually a pot of coffee ready and waiting and a rip roaring fire in the wood stove. He found his niche as lead outside mechanic for Crown-Zellerbach. He loved his job and took a great deal of pride in keeping the equipment in top working condition. He knew that the men who worked on those crews and their families depended on that equipment for their livelihood. He drove "crew bus," was an active member of the safety committee and his union and for many years, and was an active member of Seaside Christian Church. Mike was preceded in death by his parents, son, brothers Calvin, Jesse, Harvey, Walter, LeRoy, Hartsell Marlow, Roger Patrick and sisters Leatha, Ann, Lavetta and great-granddaughter Aubrey Lynn. He is survived by his brother John (Koula), his sons, daughters, grandchildren Deana Marie (Don), Amy Lynn (Rob), Emily Ann, Jessica (Chris), Sarah, Michael, Jennifer, Jason, Nathan, Rebecca Lynn and James Thomas, great-grandchildren Jordan, Joshua, Christian, Kanani, Alexandria, Cipriana, Nicholas, Tyler Thomas Ross, Noah Matthew and Mackenzie. All his friends in Seaside, his long term companion Jean Byers and Dotty Horn. He will be greatly missed but will be forever in our hearts. A visitation will be held from 9:00 a.m. to 12:00 p.m., with a funeral service to follow at 1:00 p.m., on Tuesday December 17, 2013, at Hughes-Ransom Mortuary in Seaside. A private interment will be at Ocean View Cemetery in Warrenton.