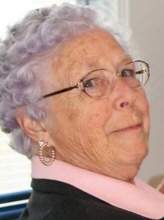 Mary Elizabeth Smith Klosterman (Betty) was born in Portland, Oregon, on Dec. 26, 1920, to Charles Peter and Helen Smith. She grew up in Seaside, Oregon, and attended grammar and high school there. Mary married Peter Kemna Klosterman, and together they raised three children in Lake Oswego, Oregon. They enjoyed 46 years of profound happiness until Peter died on March 24, 1984. Mary's hobbies included reading, knitting and cooking. Her absolute main priority in life was her children. Mary is survived by her daughter, Elizabeth Klosterman Hjorth; son, Peter Michael Klosterman; and daughter, Christy Klosterman Rainey. She was blessed with six grandchildren and 13 great-grandchildren. Mary was a devout Roman Catholic all her life, and she inspired her children to follow suit. She will be sorely missed on earth, but a stupendous addition to heaven. The rosary will be recited at 10:30 a.m., and a memorial Mass will follow at 11 a.m., on Thursday, March 3, at Our Lady of Victory Catholic Church in Seaside. In lieu of flowers, the family suggests donations be made to Providence Hospice, at 6410 N.E. Halsey St., Suite 300, Portland, OR 97213. Hughes-Ransom Mortuary & Crematory is in charge of the arrangements.
To order memorial trees or send flowers to the family in memory of Mary Elizabeth Klosterman, please visit our flower store.