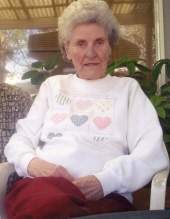 Methel Arlene Aune, wife; mother of two, Erling J. Aune Jr. (Josie) and Kathleen Aune Houck; grandmother of four, Cassandra Aune Jenks, Ezra Aune (Vonnie), Wesley Houck (Amber) and Jason Houck (Tara); great-grandmother of seven, Zach Jenks, Grant Jenks, Joshua Aune, Judah Aune, Josiah Aune, Landon Houck and Camryn Houck; and retired teacher and bank teller. Methel passed April 7 at Nehalem Valley Care Center in Wheeler, Oregon. She was born on March 8, 1926, in Erie, Pennsylvania, second youngest of six, to Ralph and Bertha Billings. Preceded in death by her husband, Erling J. Aune Sr., her parents and five siblings, she was raised in Erie and graduated from Girard High School and Edinboro State Teachers College. Upon graduating from college she moved to Las Vegas, Nevada, began teaching as an elementary teacher, met her future husband, Erling J. Aune, and married July 12, 1952. They welcomed Erling Jr. and Kathleen to the family. Methel retired from teaching when Erling Jr. was born and became a mother, housewife and bookkeeper for her husband's construction company. In 1964, the family moved to Oregon, first to Mollala and then to Cannon Beach, where they owned and operated the Cannon Inn Restaurant for five years, at which time they moved to Seaside, where Methel became a bank teller at Benjamin Frankln Savings and Loan, which later became the Bank of America. Upon retiring from her banking career, she and Erling Sr. bought a motor home and snow birded to Arizona during the winters, as well as traveled the Alaska Highway. Methel loved gardening, and could be found tending her plants and flowers. Another of her loves were the many beautiful oil paintings, including ocean and meadow scenes, her family has cherished over the years. Methel was known and loved for her wonderful dry sense of humor and sayings that would make you laugh. Her grandchildren have a standing joke: Whenever spending the night at Gramma's house, she served them burnt toast with breakfast. She refused to replace her old toaster, and one time when she was away, Erling Jr. and Josie decided to retire the old toaster, replacing it with a new one. When Methel returned, she was not one bit happy that her "perfectly good toaster" had been replaced. Methel was a devoted wife, mother, grandmother, great-grandmother and a true friend to many. She always put others' needs before her own. She was loved dearly and will be greatly missed. A memorial service will be held at 10 a.m., Monday, April 18, at North Coast Family Fellowship in Seaside, with a private family service later in Portland, at Willamette National Cemetery, where she'll be reunited with her beloved husband of 58 years. Memorial contributions may be made to the American Cancer Society or to the Seaside Museum.