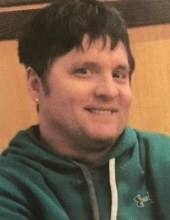 “Character comes out in adversity, and he was a beacon to everyone as he bravely dealt with what would have defeated a lesser soul.” – John Stevenson

Michael Ray Stevenson entered the world on July 27th, 1967 in Escondido, California. He was the first child born to his parents and first grandson for both sides of the family. He was joined by a brother, Daniel Robert in 1970, and sister, Sharon Rose in 1974.

In 1976, the family packed up and moved to La Grande, Oregon. Except for an occasional adventure, Mike would spend most of his next twenty-nine years there. The family lived in a big, old farmhouse on ten acres of land. There would be a huge variety of animals around and Mike was always an animal lover. He attended Greenwood Elementary School, graduated from La Grande HS in 1985, and attended EOSC part-time.

He enjoyed fishing, bowling, softball, and excelled in racquetball. Football and baseball were also a passion with favorite teams including the Oregon Ducks and NFL team, the Rams. There were many Cubs games attended with Grandpa Kendall, his brother, and Uncle Joe at Wrigley Field during visits to his mother’s hometown of Chicago. He loved music, with his favorite band being U2. He finally got to attend one of their concerts with his brother and son in 2011. Mike braved an Alaskan cruise in 2015 and delighted in seeing the glaciers and whales.

His two sons, Alex in 1992 and Garrett in 1998, were both born in La Grande. In November, 2005 a life changing, work-related accident occurred. Mike was left completely and permanently disabled. After one and a half years in hospitals and rehab facilities, he would settle into a new home in Gearhart, Oregon to be nearer to family. There would be many challenges over the next sixteen years, which Mike faced with extraordinary strength and courage. He never lost his quick wit and sense of humor. In 2017 he welcomed grandson, Chevy Michael James Stevenson, in whom he took great delight. He was loved deeply by his family and cherished by many friends throughout the years. On January 30, 2022, Mikes body gave out, related to his ongoing medical challenges; his spirit will live on forever.

Mike is survived by his parents, Stanley and Rosemary Stevenson, Gearhart, OR; brother Dan, Boise, ID; sister Sharon (Boty), Gearhart, OR; his son Alex, Seaside, OR; grandson Chevy, Post Falls, ID. He was a loving uncle to Noah, Springfield, OR; Gavin, Gearhart, OR; and Vann, La Grande, OR. His step children, Kayla and Kyle remember him fondly. He is also survived by other family members and many loyal friends. His family appreciated the dedicated caregivers who provided help for Mike throughout the years. His loving yellow Lab Kirby, and felines Dexter and Marley. He was preceded in death by his son Garrett Michael Stevenson on January 9th, 2022, and infant sister, Mary in 1968, and his grandparents Robert and Helen Kendall and John and Lois Stevenson.

Donations can be made to the Providence Seaside Hospital Foundation, or Columbia Memorial Hospice in Mike’s memory. A Celebration of Life will be held at a later date, to be announced.
To order memorial trees or send flowers to the family in memory of Michael Ray Stevenson, please visit our flower store.