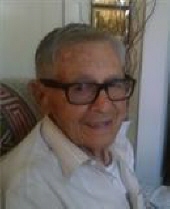 Born on 2/27/1914 in Hvar Crotia. His family settled in Astoria when he was young. In 1944 Nick served in the U.S. Army for 2 yrs. then Returned to Astoria to care for his Mother before starting his career at sea. He spent several years as a cook on fishing vessels that traveled all over the world. Retiring in San Pedro, CA. He passed peacefully on 9/22/2015 amongst family & friends. Nick is survived by 3 nieces, Joyce Danielovich-Thorn-Jackson, Rochelle (Burton) Danielovich-Parker, Diane (George) Kettner and his nephew Rocco (Vivian) Danielovich, and several great nieces & nephews. He was preceded in death by a forth niece Cheryl Sunnell, his parents and three brothers; George, Tony & Rocco. Nick was an incredible man with a heart of gold and touched every heart he met. Nick enjoyed cooking & gardening. Everyone who met Nick fell in love with his smile and kindness. Nick will be greatly missed by all. He was greatly dedicated to the Catholic faith and always attended mass where ever he was in the world. God Bless you Nick! A graveside service will be held on October 10, 2015 at 1:00 PM at Greenwood Cemetery in Astoria with Military Honors. Hughes-Ransom Mortuary is in charge of services.
To order memorial trees or send flowers to the family in memory of Nick Danielovich, please visit our flower store.