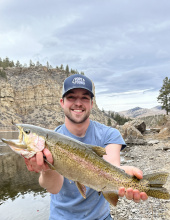 Noah M. Brien
October 06, 1998 Astoria, OR – April 21, 2022 Caldwell, ID
Noah passed away at the age of 23 on Thursday April 21, 2022 while working in Idaho and chasing his dreams of becoming a Lineman.
Noah grew up in Clatsop County and graduated from Seaside High School in 2017 where he earned many awards including Football MVP and Homecoming King. He went on to attend Asheville-Buncombe Community College in Asheville, NC. Noah attended NW Line JATC/VOLTA and graduated second top in his class in December 2021.
He worked at Dutch Bros., Brew 22, Carpet Corner and Cottage Keeper before entering the line trade. Noah had an unmatched work ethic and skill set. He made lifelong friends everywhere he worked and always had encouraging words and the biggest smile for the people he served. He and his brother went on a mission trip to Kenya, Africa and he touched many lives there and made many lifelong relationships, including a sponsor child with the same birthday as him, Olivia.
Noah loved Jesus and he knew where he was going when this day came. He was rooted in a solid foundation of love for Christ and all of mankind.
He loved adventure and was an avid sportsman. Hunting, fishing and working on the farm were his favorite hobbies and he was blessed with many friends and family who are left with wonderful memories of those adventures with him.
He leaves behind two loving parents, Jessica (Reed) and Mark Brien that love him more than words can express. He also leaves behind younger siblings he absolutely adored and was extremely proud of; Army PFC Jonah Brien who is stationed at Ft Wainwright, AK, Hannah Brien, Stephen Brien Jr, and Zachariah Brien, as well as two loving step-parents, Stephen and Brandy. A cousin he loved more like a sister, Brittany Brien and countless other cousins and uncles, two grandfathers he adored, Billy Reed and Jim Brien and two grandmother’s Madeleine Reed and Nadine Brien. Noah was blessed with the friendship of Hunter Thompson. They had a relationship that was unmatched in fun, conversation, adventures and genuine brotherly love.
A public service will be held for Noah on Thursday April 28, 2022 at 5:30 at the Clatsop County Fairgrounds. Dress in your jeans and cowboy boots in honor of Noah.
In lieu of flowers, contributions can be made to Noah’s account at the Seaside Branch of Columbia Bank or to the Go Fund Me account in his name to provide trade school and VOLTA scholarships.

To order memorial trees or send flowers to the family in memory of Noah Brien, please visit our flower store.