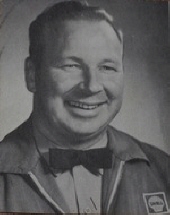 Norman "Rocky" Oleson was born January 6, 1927 in Prince George, BC to Henry and Muriel (Fotherby) Oleson. Rocky grew up there and in Vancouver, BC.
As a teen, Rocky left home to join the U.S. military and was on active duty during WWII. He was wounded in the Pacific and received a Purple Heart for his service. He originally came to Astoria as a patient at the military hospital. He went on to work for the U.S. Post Office.
During the late 1970s he owned "Rockys Shell" gas station in Astoria. Later he worked at Clatsop Community College until he retired in the early 1990s. Rocky had a lifelong love of airplanes and interest in photography.
He was a Mason and a Jaycee during the reconstruction of Ft. Clatsop. Many remember him as a "regular" at the Pig n Pancake where he could often be found having coffee with his friends. Rocky was a funny, kind, and an independent man. He was known and loved by many.
Rocky is survived by his daughters Marlene Shepherd, Long Beach, WA and her husband Jay; Jeanine Oleson, Brooklyn, NY; granddaughters Jennifer Nivens Shepherd and her husband Curt of Spokane WA, and Melissa Rogers and her husband Jason of Poulsbo, WA; five great-grandchildren; his brother and sister-in-law, Harry and Sharon Oleson of Vancouver Island; their children Shelley and Greg; his sister and brother-in law, Marlene and Marvin Manuel of Vancouver, BC.
He was preceded in death by his daughter Linda May Oleson, who passed in 1994.
A gathering of friends and family will be held Saturday, Jan 19, 2013 at the Pig 'n Pancake Restaurant, 146 W Bond in Astoria.
To order memorial trees or send flowers to the family in memory of Norman "Rocky" Oleson, please visit our flower store.