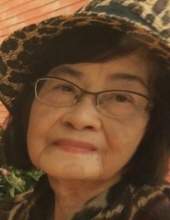 Orocia Rosie Ordaniel Foss May 22, 1936 -November 12, 2019 On November 12, 2019, Rosie Foss passed away peacefully in her sleep, After a long battle with Pulmonary Fibrosis, and Cardiac disease. Born on May 22, 1936, in Nabas Aklan, Philippines. She graduated High school, and moved to Manila, Philippines to pursue Fashion Design and Cosmetology. She often told stories that " she walked a 100 miles all over the villages to give new hair styles." She worked hard as a child to help provide for her family in the Philippines. She sewed, designed clothes, and was a Hairstylist. She was her families provider since she was ten years of age. She married Colby Hooper Foss Sr on June 19, 1967 in Manila Philippines. Soon after she married they relocated to Merizo Guam, where her husband supervised Piti Power in Guam for the Navy. They owned a retail store in Guam, where she was able to bring in fashion from all over Asia, Groceries and fishing Equipment. She enjoyed the Chomorro and filipino culture celebrating fiestas and many social gatherings. She loved going to the beach, having barbecues, fishing, and learning about the culture of Guam. Soon after her husband retired from Piti Power they relocated to the Pacific Northwest in 1977, they moved to Appleton Washington. They bought a farm and began to raise animals, grow a garden, and raise their three children. She became involved with the farming community, gardening, and Lyles Womens club. In December 6, 2006 she retired from Bornstein Seafood. She was part of the NARFE Chapter in Astoria, and the Filipino Association. After she retired, she continued to garden, spend time with her grandchildren, and her special friends, Kitty Carr, Gloria Coffee, Vi Torres, Armie Rasgo, Ludy Crane & Celina Bowley. She enjoyed being a member of Bethany Free Lutheran Church. She loved her children and grandchildren they were her world. She taught them the traditions of the Philippines and family values deeply. Rosie was proceded in death by her parents, Husband Colby Foss Sr. , her brothers Mansing Ordaniel, Lucring Ordaniel, Her sister Angelina Sumanting. She leaves behind, her daughter Daughter Roseby Foss, Cati Foss, Sons Colin Foss, John Foss, and, Colby Foss Jr. Grandchildren, Addison Foss, Cadence Foss, Thomas Foss, Colby Foss, Sister Melody Gumboc, Brother Billy Ordaniel. Cousin Celina, Ed, Glen Michelle Bowley, Shirley Felton, Niece Nimfa Andrews, Melisa Pajes, Gail Endrina, Lena & Jimmy Jimenez, Mareitta, Sharolyn ,Radford Salas, Michelle Sanchez, Mericris Ordaniel, Mike Balidio, Clementia Autentcio, Teresa, Sarah, Cody and Kolyn Lachica. Many more cousins & nieces. Funeral Service will be held on Saturday, Nov. 23, 2019 at 10:00 A.M. at Bethany Free Lutheran Church in Astoria with a visitation starting 1 hour prior at 9:00 A.M. Visitation will be held Friday Nov. 22, 2019 from 9:00 A.M - 6:00 P.M. at Hughes-Ransom Mortuary in Astoria.
To order memorial trees or send flowers to the family in memory of Orocia Rosie Foss, please visit our flower store.